The momentum behind AMD FidelityFX™ Super Resolution (FSR) only continues to grow. FSR 2 was released in May, then we celebrated the first anniversary of FSR in June, announcing that over 110 available and upcoming games support FSR, and a few weeks ago there was some exciting news at Gamescom -- Saints Row, Ghostwire: Tokyo, and the breakout star of the show, Lies of P, are getting FSR 2. This brought us up to an already impressive 34 games supporting FSR 2 in just three and a half months since its launch.

Now we have reached another significant milestone for FSR – the release of FSR 2.1 with enhanced upscaling image quality, which is available now on GPUOpen for developers and in the latest update to Farming Simulator 22 for gamers. On top of that, the release of FSR 2.1 is not the only big news we have for FSR today – adding to the six FSR 2 games announced at Gamescom, we are adding 11 more games, bringing the total of available and upcoming FSR 2 games to 45!

Included in the new FSR 2 games are big titles such as Destroy All Humans! 2 – Reprobed, Deep Rock Galactic, and the blockbuster Red Dead Redemption 2 (update info) -- all updated and available now with FSR 2. Ghostwire: Tokyo was also updated with FSR 2 just this week. On top of that, we are thrilled to announce that one of our most requested games to get FSR 2, Cyberpunk 2077, is joining the list of upcoming FSR 2 games. Read on in the blog to learn more about FSR 2.1 and for a complete list of the 45 available and upcoming games with support for FSR 2.

AMD FidelityFX Super Resolution 2.1 is available today for developers to download from GPUOpen and has already been included in the latest update to Farming Simulator 22 released on Tuesday, September 6. It has also been confirmed to be included in an upcoming update to Hitman 3, and information about additional games with support for FSR 2.1 will be forthcoming.

FSR 2.1 enhances the upscaling algorithm used by our technology and is designed to provide additional improvements to upscaling image quality over FSR 2.0 -- reducing some of the issues our software engineers identified in the initial release of FSR 2, such as ghosting or shimmering.

You can see the improvements in upscaling image quality in both the video above and in the comparison screenshot below, where there is significantly less ghosting on parts of the farming tool being used by the tractor. 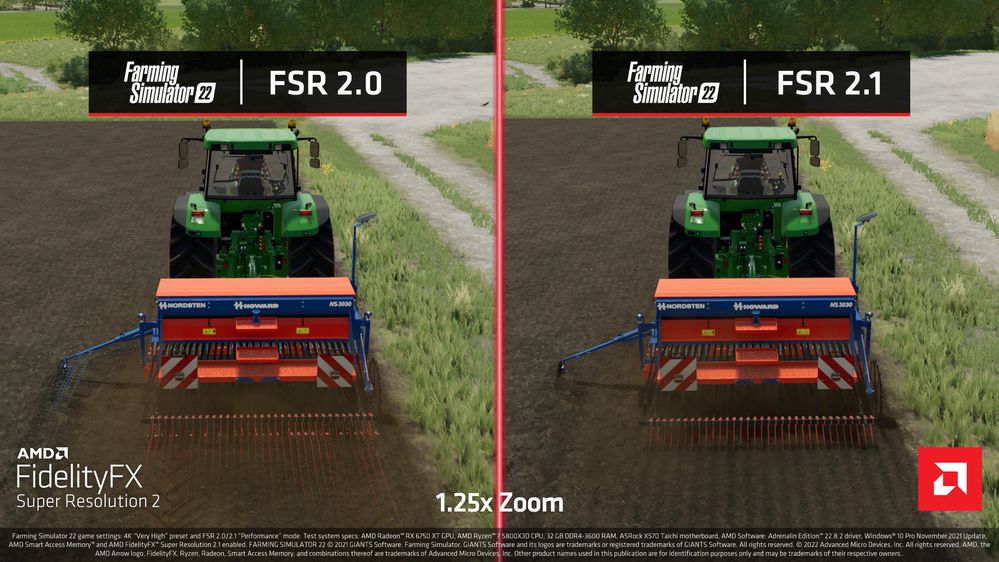 This update to AMD FidelityFX Super Resolution 2 reflects the ongoing improvements we have been making to the technology since we released it in May -- when we released the source code in June, we were already at v2.01 -- and we will be continuing to improve FSR 2 beyond this release.

In addition to releasing the updated FSR 2 API with FSR 2.1 on GPUOpen, our FSR 2 plugin for Unreal® Engine 4.26/4.27 and Unreal Engine 5 has been updated to use FSR 2.1 along with some additional improvements. You can learn more about the Unreal plugin updates on GPUOpen.

The FSR 2 Games List Keeps on Growing, Now at 45 Games

It was only a few weeks ago at Gamescom that we announced that six more games added or plan to add support for FSR 2 to their games – including Saints Row, Ghostwire: Tokyo, and the breakout start of the show, Lies of P. This update brought the total number of available and upcoming FSR 2 games to 34.

Now, as of today (September 8), we are super excited to let you know that 11 more games have been added to our FSR 2 list bringing it up to an amazing 45 available and upcoming games in the four months since we launched FSR 2 in May. 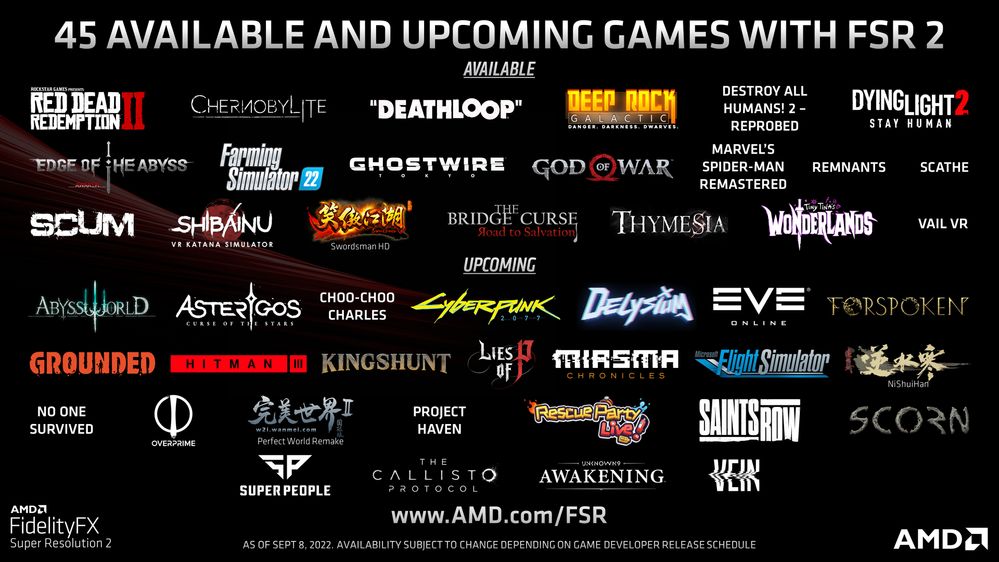 If you break the 45 games in total into available and upcoming games as you can see in the image above, there are 20 games available with FSR 2 today:

The upcoming game Asterigos: Curse of the Stars has a free demo available now that includes FSR 2 that you can download and try out today.

These new games bring the total number of AMD FidelityFX Super Resolution (FSR 1 and FSR 2) games to over 135, an incredible achievement for our upscaling technology and the number will only keep growing. You can see the full list of games that support FSR on our webpage at www.amd.com/fsr.

The anniversary of FSR was back in June and now that we are heading into September, we are well into the second year of our upscaling technology and its uptake hasn’t slowed down. The number of games being added to the support list each week clearly shows that game developers have embraced FSR technology, and we can only expect to see the support grow as more developers come on board. Now that FSR 2.1 is available you can expect further updates as to what games (either existing games with FSR 1 or FSR 2 or games planning to add FSR 2) will be using FSR 2.1.

This article is written by :
Alexander Blake-Davies is a Senior Software Product Marketing Specialist for Radeon™ Software for Developers at AMD.