New AMD Catalyst 15.7 drivers are now available for Radeon graphics users, old and new. This release is a certified WHQL version. It also comes with support for Windows 10 for the Technical Preview users.

It’s been some time since we’ve had an officially certified, stable WHQL release. AMD has heard you – the latest Catalyst 15.7 is WHQL-Certified and come with all the incremental updates from the betas of last months and much, much more.

Virtual Super Resolution (VSR) and Frame Rate Target Control (FRTC) are now available for owners of older Radeon products after installing the latest Catalyst 15.7 driver. Previously available only for R9 Fury & 300 Series cards, these features give you more control over the quality of image, performance and power usage. 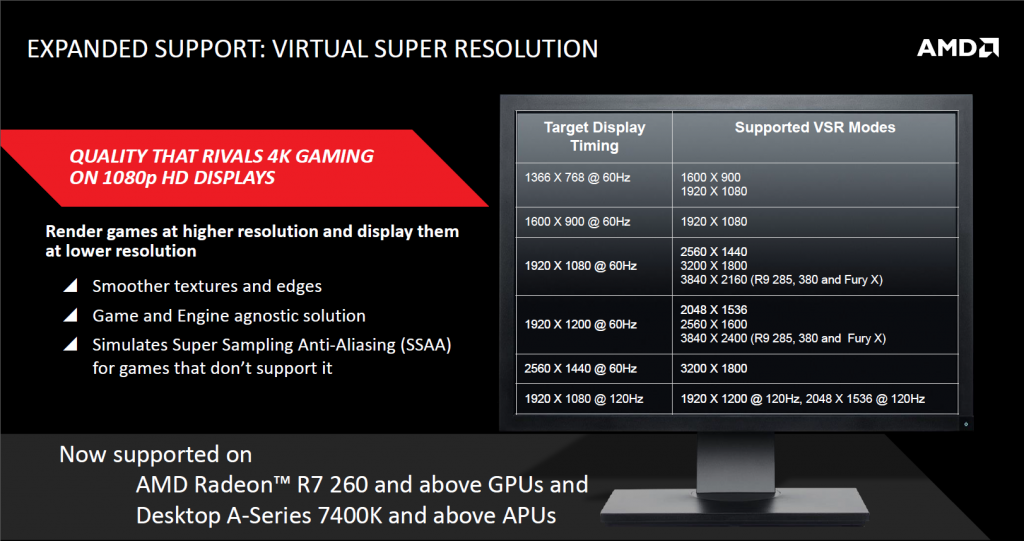 VSR provides image quality enhancements to games and Windows® desktop users by rendering images at a higher resolution and then down-scaling the same. It is now supported by the following Radeon graphics series: FRTC allows you to set a maximum frame rate when playing an application in full screen exclusive mode. This feature provides the following benefits:

This feature is supported on applications using DirectX 10 or higher and on the following Radeon graphics:

If you happen to have one of the coolest monitors out there with the FreeSync support, and you’re also an enthusiast gamer with CrossFire setup, the Catalyst 15.7 drivers has something special just for you. FreeSync mode is now enabled for CrossFire configurations for games using DirectX 10 or higher!

New Catalyst Software Suite packs all the CrossFire profiles that have been added by AMD since the Omega release. These include:

Internet reports also mention that Fury X perform significantly better in Far Cry 4, and users are seeing improvements across the board in many various titles. Tests show CPU overhead reductions (especially in Windows 10) as well as tesselation boosts.

TL;DR – You should check these new drivers out, they will possibly make your game run faster. While still only a “Technical Preview” driver with some of the features disabled, the Catalyst 15.7 is the first officially available driver for the quickly approaching Windows 10 operating system. This new driver includes a full support for WDDM 2.0 (Windows Display Driver Model 2.0 – in short: a vastly improved way Windows handles the work dedicated for graphics cards). It will work with all GCN (Graphics Core Next) – based Radeon cards – that means HD 7000 and newer!

If you’re using Windows 10 as part of the Windows Insider Program, you should give these new Catalysts a shot right now. For everyone else who are awaiting the July 29th excited – and rightly so – this means your graphics card will be well supported in the new OS when you upgrade to it.

Catalyst 15.7 is a major driver release for all Radeon cards owners and we definitely recommend you to get them. Like, now. Go and install them!