Video outputs that I used to know

There are many video outputs on the market, but what should you know when connecting your PC or gaming console to a TV? Which cable should you use for optimal image quality? This tutorial will try to explain the differences between the various connections available to you.

Analogue outputs – the past

Analog display outputs are for the most part now obsolete, because analog signals are very vulnerable to electromagnetic noise. To get good picture quality, the outputs also require high quality cables with well-separated wires and thick external isolation. Analog display outputs suffer from a number of other limitations.

The most well-known analog output is VGA, which is available through an HD-15 display connector. 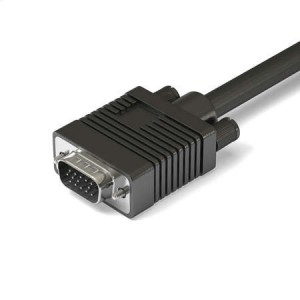 Among the new products being produced today, VGA outputs and inputs exist only in low-end LCD monitors and low-end projectors that are ubiquitous in offices, schools, conference centers and universities. Plain VGA is sufficient for daily office work on monitors or showing a presentation on a projector – tasks, in other words, that don’t require stunning picture quality, extremely high resolution, high refresh rates and audio streaming. Professionals, however, eschew VGA for its considerable limitations:

Digital outputs – today and the future

Digital display outputs were designed to meet LCD display needs. The first LCD TFT computer monitors in the 90s used analogue VGA connectors and cables, but it wasn’t enough to exploit the full potential of the new screens. For example, at every display resolution, the user must auto-adjust the screen in the monitor OSD. Otherwise the screen could be cut or wrongly formatted in the frame.

The first widely known digital connector for LCD monitors was a DFP (Digital Flat Panel) connector. It was developed by Compaq computers and later approved by VESA (Video Electronics Standards Association) as the commercial standard. 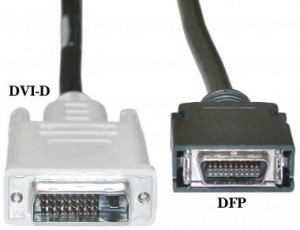 Unfortunately, the DFP specification was good only for short-term use, and resolution was limited only to 1280 x 1024.  In the late 90’s most consumer LCD monitors were 15” and had 1024 x 768 resolution.  Later 17” and 19” monitors stepped up with 1280 x 1024, but upcoming high-end business LCDs (20” and more) should get 1600 x 1200 resolution and still need better video interface. CRT monitors were still very popular because of high LCD prices and for the late 90’s only CRTs offered high resolutions such as 1600 x 1200 and 1920 x 1440. High resolution was obviously welcome in CAD/CAM development on high-end workstations.

DVI specification was introduced in 1999 and was approved by a host of vendors that previously supported DFP. Though the connector received the headroom required to add signaling lines in the future, the maximum resolution supported at the time was 1920 x 1200, with a 60Hz refresh rate. DVI is the standard for PCs, particularly monitors and projectors, but did not find its way into other consumer electronics. 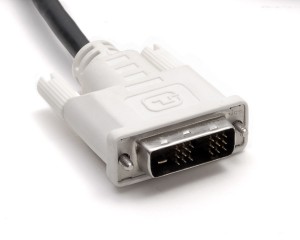 DVI became the computer industry-leading standard, first in high-end business monitors in the early 2000s and then in consumer models in the mid-2000s. DVI remains one of most popular connectors today. The cable length is limited to 4,6 meters when using high resolutions like 1920 x 1200 pixels, and to about 15 meters with lower resolutions like 1280 x 1024.

The connector was later upgraded with extra signaling lines to meet the requirements of 30” monitors. In the late 2000s Apple, Samsung, HP, Gateway and DELL all entered the market with new 30” screens with a resolution of 2560 x 1600 and a 60 Hz refresh rate. The upgraded connector featured more data pins, and was called Dual-Link DVI. The previous generation was called Single-Link DVI, but you rarely hear this name used when you buy a new screen or cables in stores.

DVI still has one serious advantage: you can connect old CRT monitors if necessary. VGA monitors can be connected with a DVI–VGA adapter. These adapters have been bundled with almost every VGA card in the market for the past ten years. 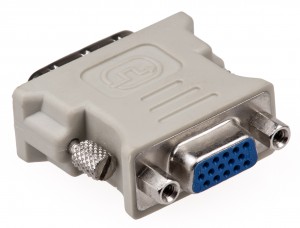 But beware, not every DVI port can be used as a VGA port—only DVI-I ports that allow for the transmission of digital and analog signals boast that ability. DVI can also be used as an HDMI port (via DVMT cable), though it cannot transfer audio. In this case, audio must be connected with additional cables.

There are two main DVI connector types: DVI-I and DVI-D. Both can handle 1920×[email protected] Hz (Single Link – first line on the picture) and 2560×[email protected] Hz (Dual Link – second line on the picture). DVI-I has four extra pins and can be used as an analog VGA port, while DVI-D connects only to digital devices. It is physically impossible to connect a DVI – VGA adapter to a DVI-D port on a VGA. 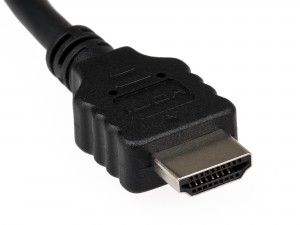 HDMI was introduced in 2003, with the aim of universalizing video connectors for all types of electronics. The HDMI interface transfers high definition uncompressed video and both compressed and uncompressed audio in one wire. It’s very convenient for connecting gaming consoles (Xbox 360, Xbox One, Playstation 3, Playstation 4), computers, digital cameras, tablets and smartphones.

Today’s HDMI connectors can be found in almost all TV’s, projectors and all others kinds of displays. HDMI has gone through numerous revisions, but today there are two main forms used in the electronics industry – 1.4 and 2.0.

HDMI 1.4 was introduced in 2009 and boasted, for the first time, 3D support for TV and Blu-Ray 3D movies (one of the first 3D movie players was Sony Playstation 3 gaming console). HDMI 1.4 specs limit the maximum resolution to 4096 x 2160 with a 24 Hz refresh rate (DCI 4K mode) and 3860 x 2160 with a 30 Hz refresh rate (UHD mode). These parameters are quite good for Blu-Ray players, gaming consoles and many other devices, but somewhat pale for PC gamers, who will want to play on UHD TVs and monitors with a 60 Hz refresh rate.

HDMI 2.0 was introduced in 2013, and is quite fresh in the market. The main advantage, again, is that it supports 4K resolution with a 60 Hz refresh rate. The HDMI 2.0 interface is supported by some new high-end TVs and monitors, though that should always be checked in the detailed specifications in device manual or on the vendor’s website before a purchase is made. Not all VGA cards currrently support HDMI 2.0. For example, Sapphire Radeons supports HDMI 1.4 (when connecting directly to an HDMI port on the Sapphire Radeon card), but you can get an HDMI 2.0 port using a DisplayPort – HDMI 2.0 adapter. Native HDMI supported Sapphire Radeons are slated for a 2016 release. 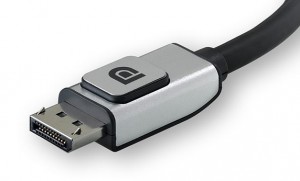 The Display Port specification was introduced in 2006, while the first units with this interface appeared on the market in 2008. VESA (the Video Electronics Standards Association) designed it to replace older VGA and DVI ports. The display port was to be a computer-only standard, and so did it remain. Today the Display Port is available only in high-end PCs and some high-end business and gaming notebooks. DP’s popularity has taken a serious hit from the higher licensing fees than one gets with an HDMI interface.

Display Port has undergone numerous revisions, but for now there is only one important version – 1.2a. It’s supported by almost all VGA cards available on the market. In practice, Display Port abilities are similar to those offered by HDMI, and most standard FullHD or even 1440p computer monitors (and projectors) don’t gain anything compared to older DVI and HDMI interfaces. Likewise, an HDMI Display Port 1.2a can transfer audio to a monitor with speakers, but currently most available LCD’s don’t have decent quality speakers.

But there are some scenarios which will bear out the benefits of DP. For example, there are 1440p and 4K LCD’s designed for gaming that include new frame syncing technologies such as AMD FreeSync. These are currently supported only through a Display Port connection from a PC to an LCD.  AMD is working on supporting FreeSync over an HDMI connection for release in 2016.

Which interface should I choose?

There is no unequivocal answer to this question, but we can list some scenarios and optimal choices for them.