Enlist early to Battlefield 1 with an Early Enlister Deluxe Edition discount code that is now being bundled at select retailers with our SAPPHIRE NITRO+ Radeon RX 480 and reference SAPPHIRE Radeon RX 480 graphics cards.

Earlier this year EA & DICE wooed us all with the announcement of Battlefield 1, set in the World War I realities. It looks incredible, and multiple hands-on reports as well as, most recently, the Open Beta, proved the gameplay is just as solid.

Battlefield 1 uses the latest iteration of DICE’s acclaimed Frostbite engine, and with it the game is heavy on destruction, particle effects and dynamic environment conditions changes. Atop the novelties of the engine in BF1 sits the support of DirectX 12 – the next generation of Microsoft’s graphics API. With SAPPHIRE Radeon graphics cards that use Graphics Core Next architecture, it means greater efficiency with native support of Async Shaders.

Planning an upgrade to an RX 480? That’s even wiser now – you’ll get two upgrades at the same time! AMD knows that a lot of PC gamers are eagerly awaiting the premiere of Battlefield 1 and they have prepared a special promotion. Launching today at select retailer and etailers, with a purchase of SAPPHIRE NITRO+ Radeon RX 480 (8GB & 4GB) or the reference SAPPHIRE Radeon RX 480 (8GB & 4GB) graphics card, you will get a discount code for the Battlefield 1 Early Enlister Deluxe Edition of the game that will drop the price on Origin for you to that of the base game. 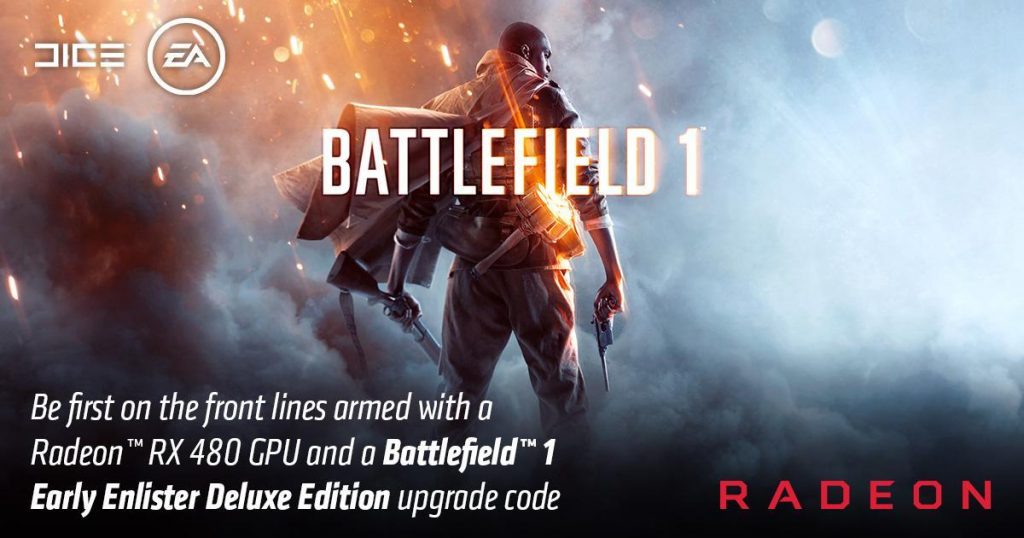 To claim the code you’ve got at participating retailer, go to AMD Rewards site: http://www.amdrewards.com/amdrewards/.  There you will generate a discount code for Origin, EA’s digital distribution platform.

To redeem your Battlefield 1 Deluxe Edition Promo Code:
The discount promo code expires November 30, 2016. To play the game 3 days ahead of launch, promo code must be redeemed by October 18, 2016.

See you on the Battlefield!