In part two, we continue our foray into powerful video game weaponry. For more information on our criteria, have a look back at part one.

Kicking off part two of our list is the legendary… 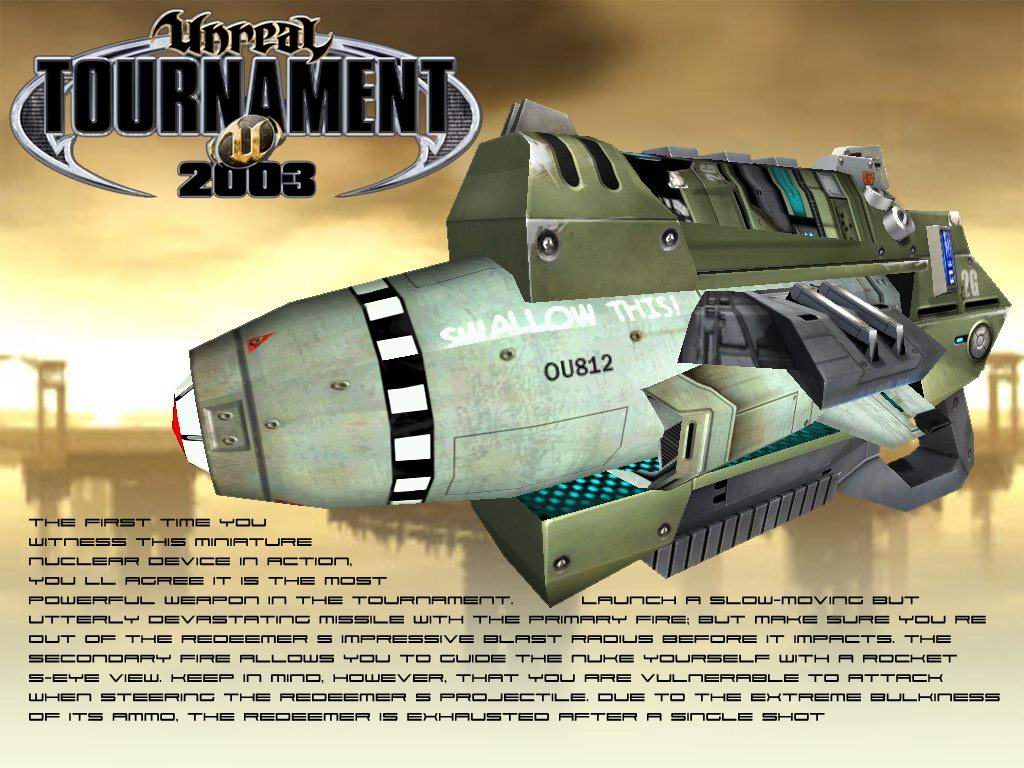 The Redeemer is Unreal’s most powerful superweapon. A thermonuclear missile boasting fat range and fatter damage, it is the very definition of overkill. When fired in primary mode, it sends a slow moving missile that obliterates everything within its gigantic splash radius. The secondary fire mode allows players to steer the missile and help it evade incoming fire (the missile can be destroyed), gather reconnaissance and position it for maximum damage. If need be, it can also be detonated manually before impact.

Unfortunately, the redeemer also has a long list of drawbacks: It can be destroyed from afar, makes its user vulnerable in manual mode and has but a single missile. No reloading is possible and the set-up time is long. Despite these problems, it’s amazing when it connects…a monster killer indeed.

One of the most gruesome weapons in gaming history. The Cerebral Bore scans for brain activity and locks onto targets, then fires its projectile right into the target’s skull (with all due graphic animation and gore), whereupon it detonates. It’s a fairly niche weapon, since it can’t attack all enemies and requires some time to lock on, but the sheer inventive brutality on display is nothing short of glorious! 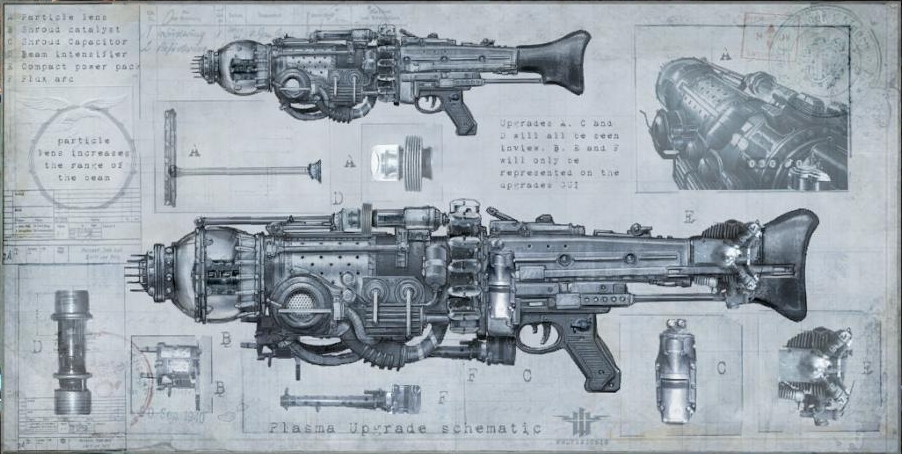 The Particle Cannon fires Veil energy in a twisting beam which outright disintegrates living targets, leaving only bloody spots where they stood. It is useful for quickly clearing multiple enemies down a narrow hall, as it quickly jumps from target to target. Once upgraded with the Flux Arc, the weapon aims automatically, allowing it to twist slightly around corners and kill people at medium distance. It deals massive damage per second and can take down almost all enemies in the game. The screaming of disintegrated enemies, particle effects, short wind-up time (admittedly this is a drawback but it looks really cool) and reasonable effects on the environment make it one of the most awesome superweapons in gaming!

(Thank God this is a video game) 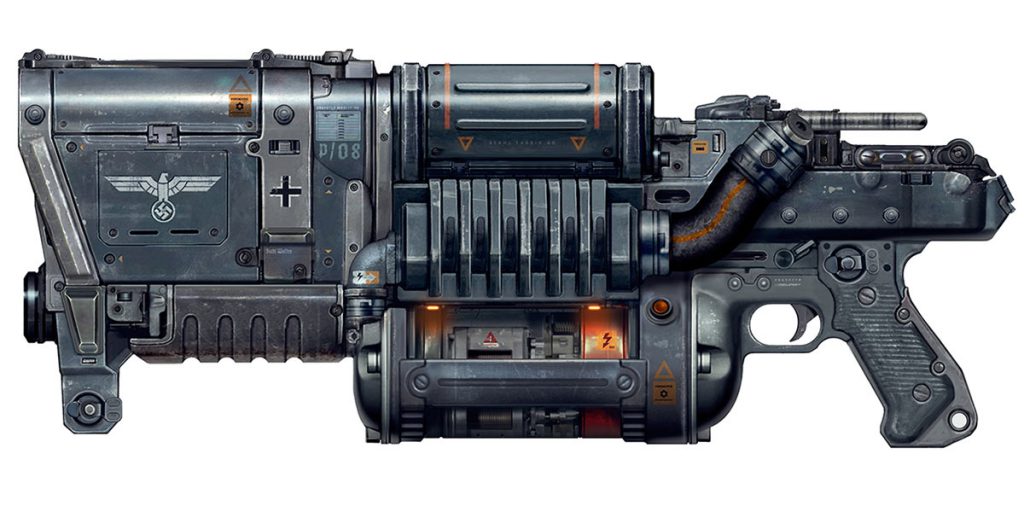 The Wolfenstein series is hellbent on having amazing weapons in every installment. The LaserKraftWerk in The New Order is a multi-purpose tool of annihilation. In its primary mode it fires lasers which deal medium damage and can vaporize human targets or deal heavy damage to robots. If charged up, it can outright decimate even mighty cyborgs, turning them to paste. Once the player has upgraded it, they can even target parts of enemies or multiple smaller enemies to spread the carnage in just a single burst of energy.

(Video by Ahoy, amazing video on weapons in The New Order)

(Not fully upgraded, but still awesome)

So far, it’s an amazing railgun/sniper/automatic laser rifle hybrid, but its other usage as a tool is also quite clever. It can be used to make holes in fences and barricades, creating dynamic cover or small doorways for the protagonist. This fire mode also lets it ignite people. After all, this is a Wolfenstein game.

Its only drawbacks are a low energy (ammo basically) count, a long upgrade path and how EMP generally damages its ammo capacity. Still, it grows with the player and is a very powerful weapon that is easy to recharge after almost every fight.

The Portal Gun is an ingenious device! It fires a colored projectile from the barrel. If it strikes a valid flat surface, a portal of corresponding color is formed. If a portal of another color has already been placed, the two portals are linked, allowing the player to move through them!

Its direct combat use in Portal is fairly muted as it’s primarily an excellent puzzle game, not an FPS. Nothing will happen if a portal is shot at an enemy or another object. But the few things we get to see it do against turrets and other obstacles, and just the concept itself, earn it a place on our list. Such a weapon in a title like Doom, Unreal, Quake or Wolfenstein would be a huge advantage in mobility and make for excellent trick shots and the strategic domination of enemies and arenas. For a different device no less full of potential, see the Translocator from the Unreal Tournament. Both it and the Portal gun favor fast thinking and mobility over pure damage.

A powerful and highly versatile weapon, the Leech gun accumulates ammo by using the secondary fire to draw energy from nodes found throughout the Sphere. Different nodes enable the gun to take on different properties, making it quite the all-purpose device. This also makes it interesting from a game design perspective since its properties largely depend on the level designers!

It can fire Plasma (red glow) and fast-moving energy balls at a high-speed discharge rate. Frost (a light-blue glow) continuously emits a short ranged freezing cloud at a constant rate of fire, slowing enemies and freezing them. It’s ideal for close range situations with lots of generic enemies. It also boasts lightning (white sparks), which deals massive damage per shot with high DPM levels to boot. Last but not least, there is the sunbeam, an orange glow which continuously emits a long-range incandescent beam and pushes the player back while he or she is firing. Overall, the Leech gun produces a constant fire rate and inflicts a good dose of damage.

The Electrodriver is Yahtzee Croshaw’s favourite Painkiller gun and one of the most insane combinations I have ever seen. The primary fire uses the Driver to launch deadly shurikens at opponents at a blinding rate. Behold the real power of this weapon at medium range, where the shurikens explode and deal decent splash damage. While the rate of fire on the Driver is very good, the speed at which the Shurikens travel does require good target leading skills. For the most skilled users, learning to master the distance at which the shurikens explode will give them license to unleash utter devastation.

The alternative fire mode, sometimes referred to as the Lightning Gun, shoots out a continuous bolt of electricity that deals sustained damage. This is a great medium range weapon that combines both fire modes and leads to electrified shurikens which zap people. Given the ghastly creativity that went into this weapon, I can understand why it’s a fan favourite. 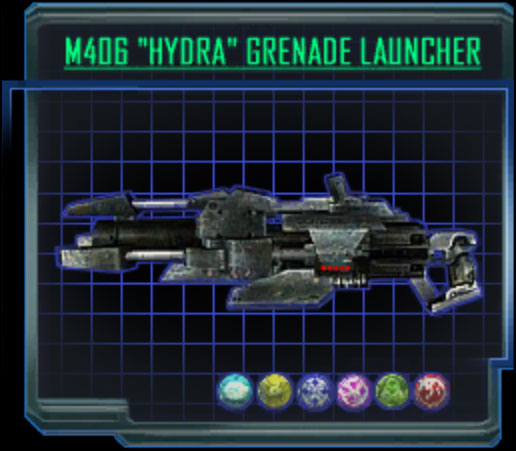 Perhaps the most versatile grenade launcher in gaming, this one is part of an underrated video game. Pressing the primary fire button lobs a grenade in the direction you’re aiming. The higher you aim, the greater the arc and the greater the range. Normally the grenades (regardless of type) explode on impact but if you are good with timing, holding the trigger before release will give it a timer as well as allow the grenades to bounce a bit before they detonate.

So far so good, a well made old school video game grenade launcher…

But what makes it so awesome is that it has no fewer than six grenade types! The classic fragmentation grenade which makes a big, loud boom, the incendiary grenade which sets everything on fire and helps disorient some of the enemies to boot. The EMP grenade is of great use against robots and machine entities, and it can slightly disorient humans too. The concussion grenade can help floor enemies or push them off in different directions, disorient a crowd of them or help players make trick jumps. There’s also a toxic grenade, which can create an area denial cloud of toxic smoke that can deal massive damage over a period of time. Finally, the smoke grenade, while less useful for a single player, is cool nonetheless as it can help confuse enemies and aid retreats or attacks.

It is a very versatile weapon with a good skill ceiling and potential. I hope we get to see more amazingly silly/versatile grenade launchers like that in future titles!

This ends our list for now. There are more amazing weapons in all game genres, but those showcased here are among the cream of the crop. We hope you enjoyed this look at some of the most interesting death dealers out there and that you’ll check out more of these games and push on in the search for other awesome weapons. I also really hope game developers restart the race for the best superweapons in gaming. It’s not only a great way to showcase amazing technology and level design, but it’s so much fun!