The History of Graphics Cards Coolers – Part I

A heatsink with a fan – how much more complicated could it be?

Most of the power delivered to a chip is emitted in the form of thermal energy. That energy has to be dissipated into surrounding air. Coolers mounted on graphics cards have come a long way since the nineties.

In the early years of graphic accelerators, there was no need for extra cooling as chips were bare. 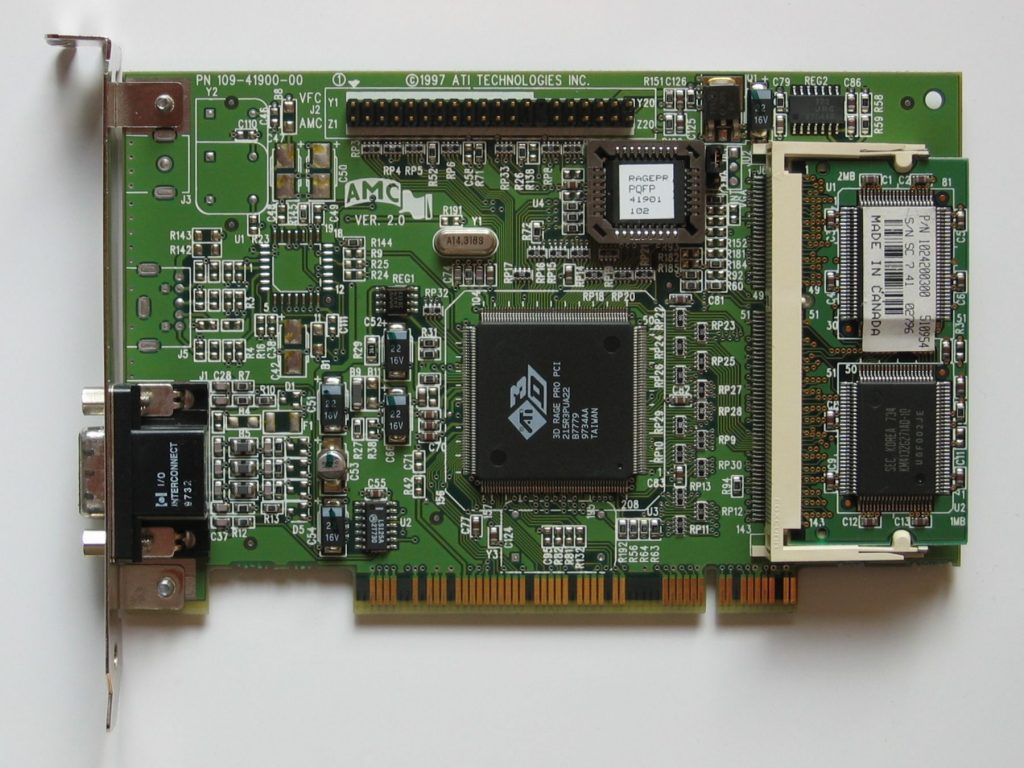 Small passive heatsinks and heatsinks with low-diameter fans were later introduced, usually attached to GPUs with adhesive paste. Pushpins were rare and no one had even thought about screws. 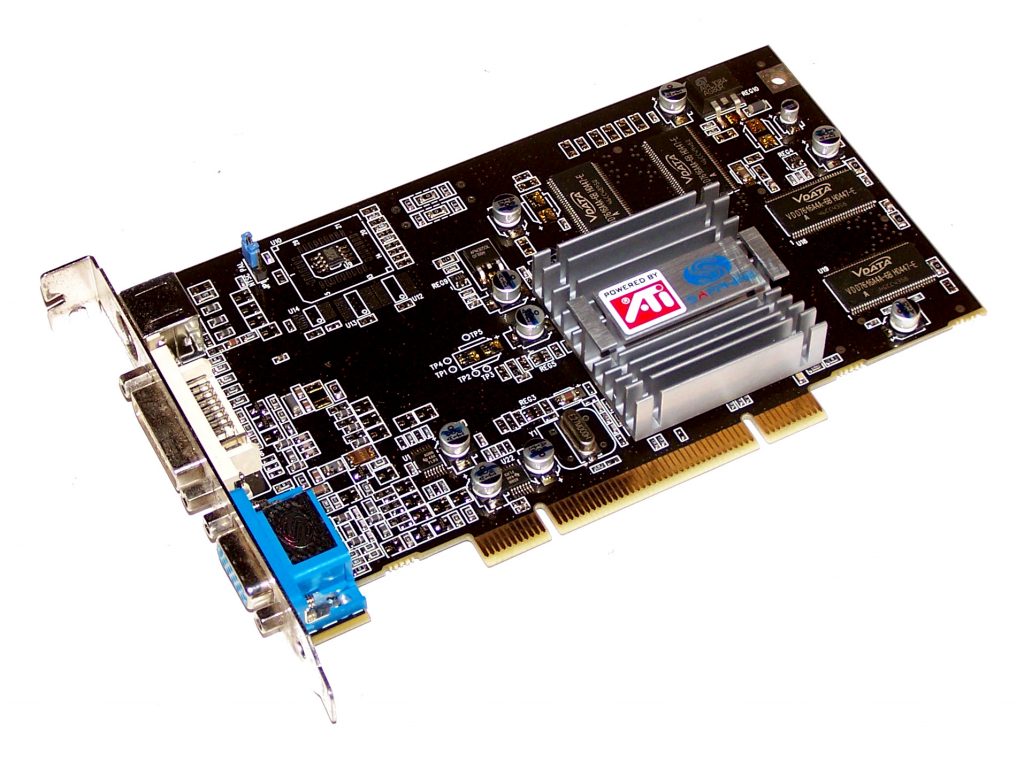 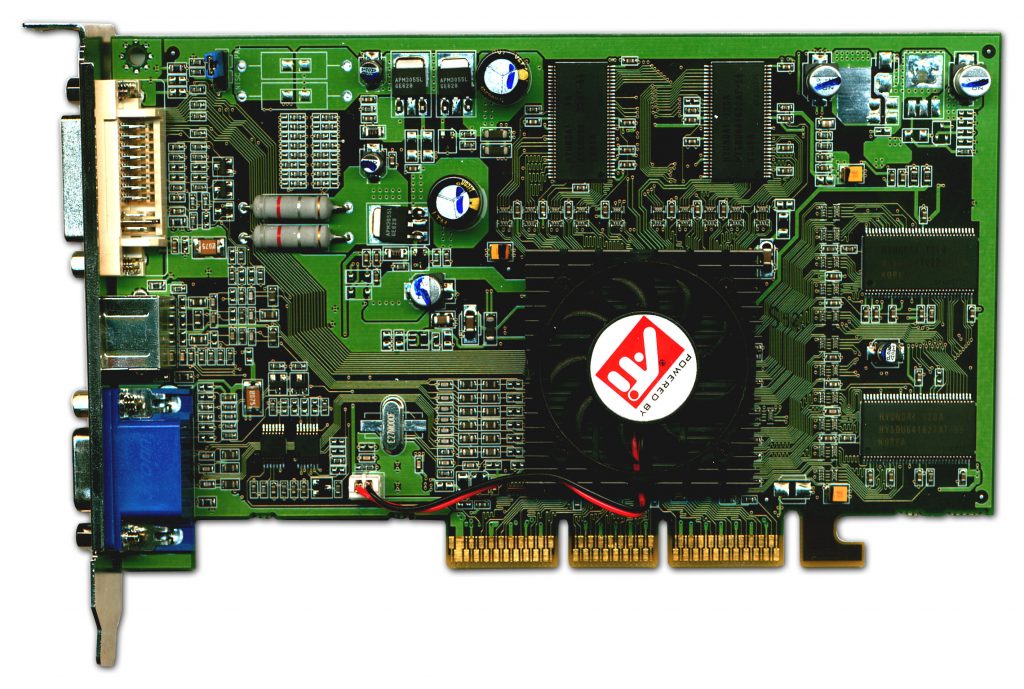 Radeon 7500 with a small heatsink plus tiny fan glued directly to the GPU, AD 2001

As they gained more computational power, graphics cards also become more power hungry. According to specifications, an AGP slot is capable of delivering up to 48,25 W. At some point, that was not enough and connectors for auxiliary powering were introduced. At first these were Berg (floppy) connectors or 4-pin Molex connectors. While heatsinks and the fans used to cool them had by then grown somewhat in size, they were still fairly small and light. All cards (with very few exceptions) occupied only one PCI slot. 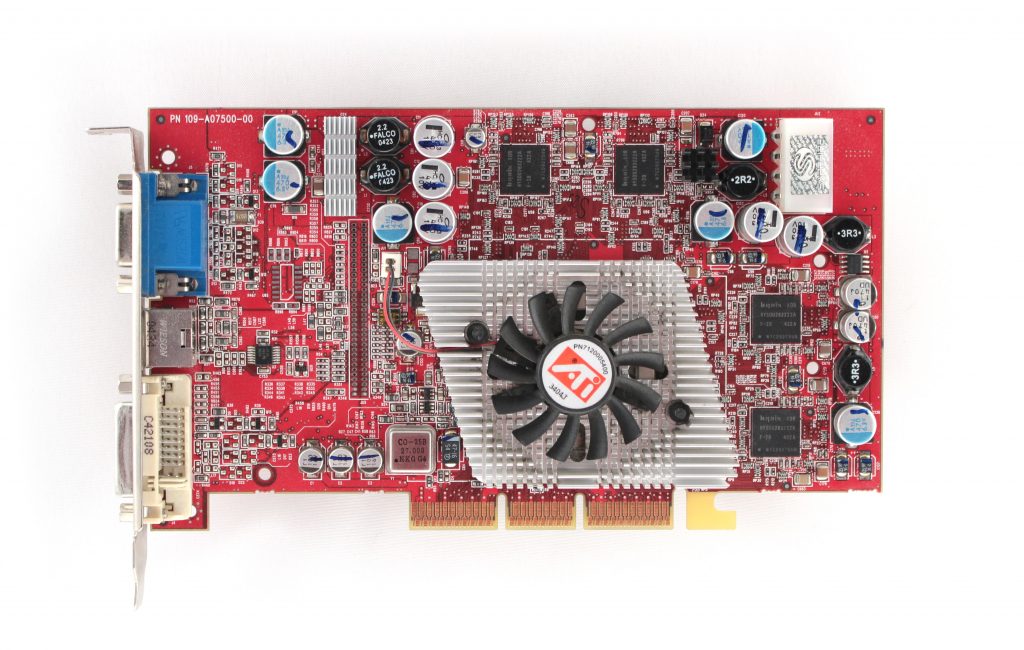 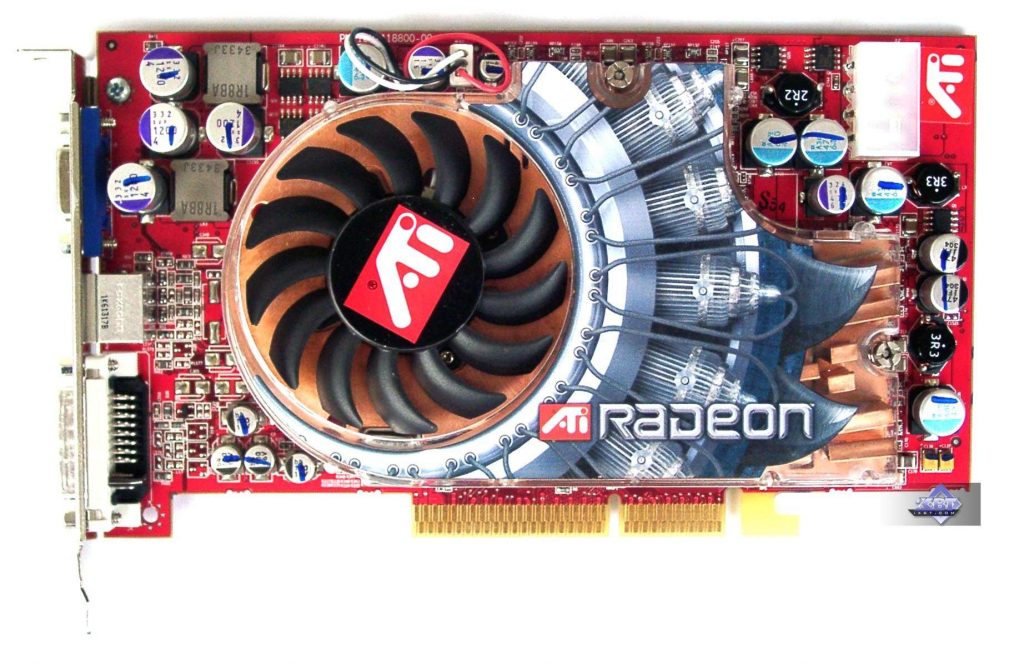 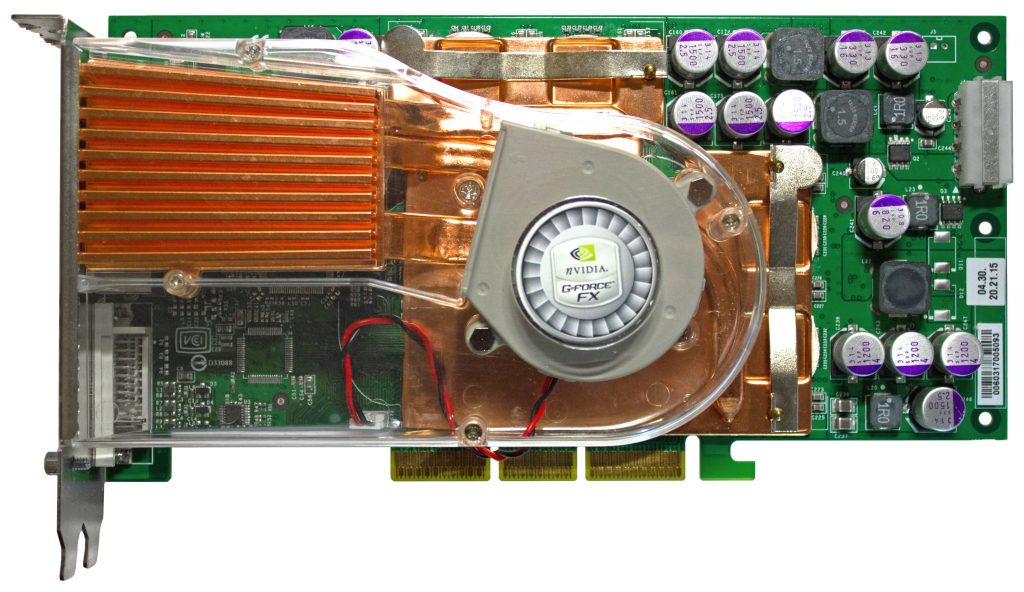 FX 5800 Ultra – cold air was sucked in through the PCI slot and then hot air was also pushed out through the PCI slot. Both the intake and outtake were positioned side-by-side. Unfortunately, the card turned out to be one of the loudest models in history. AD 2003

The company ABIT especially favoured blower-style coolers and established the OTES system, which it used on both their cards and motherboards—though the latter weren’t actually based on blower-style fans. 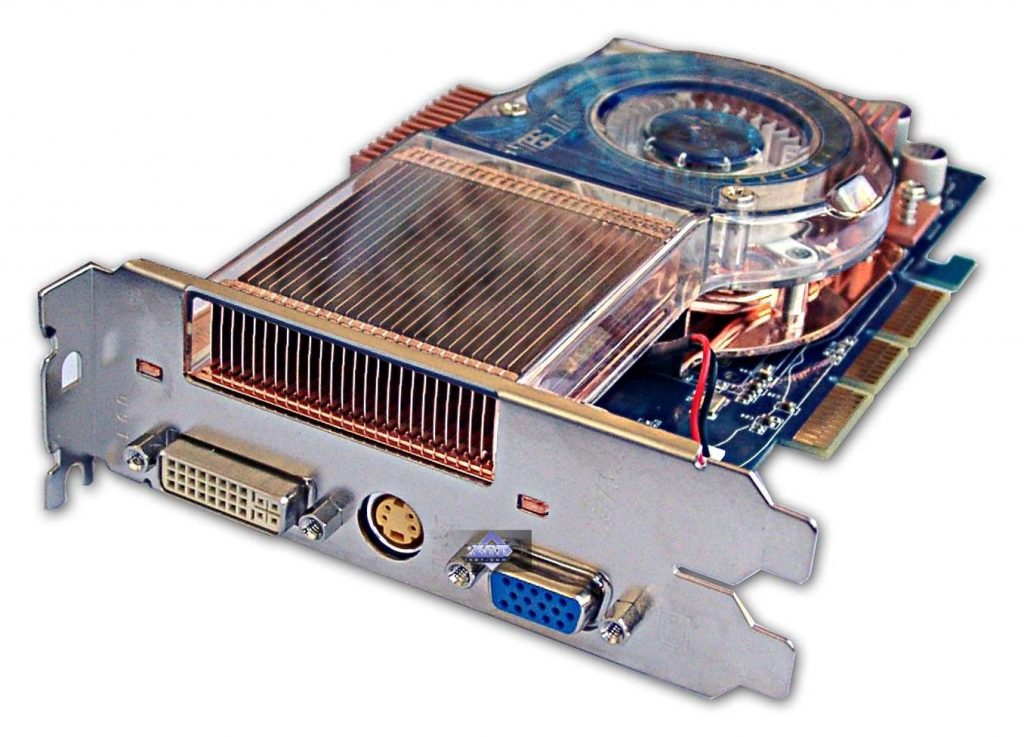 This is when heatpipes—metal pipes with liquid inside (usually ammonia, acethone, water, diethyl ether or some type of chlorofluorocarbon)—began to be implemented on a larger scale. As liquid gets hot, it evaporates and travels through the pipe. As it travels, it loses heat and turns into a liquid again as it cools down. This loop is endless, making the heat pipe an excellent way to transfer heat from one point to another. The pipes are usually attached to a cooling plate directly over the GPU and then transfer the heat to the heatsink located away from the GPU.

Heatpipes eventually became, and remain today, a fixture in mid- and high-end cards. 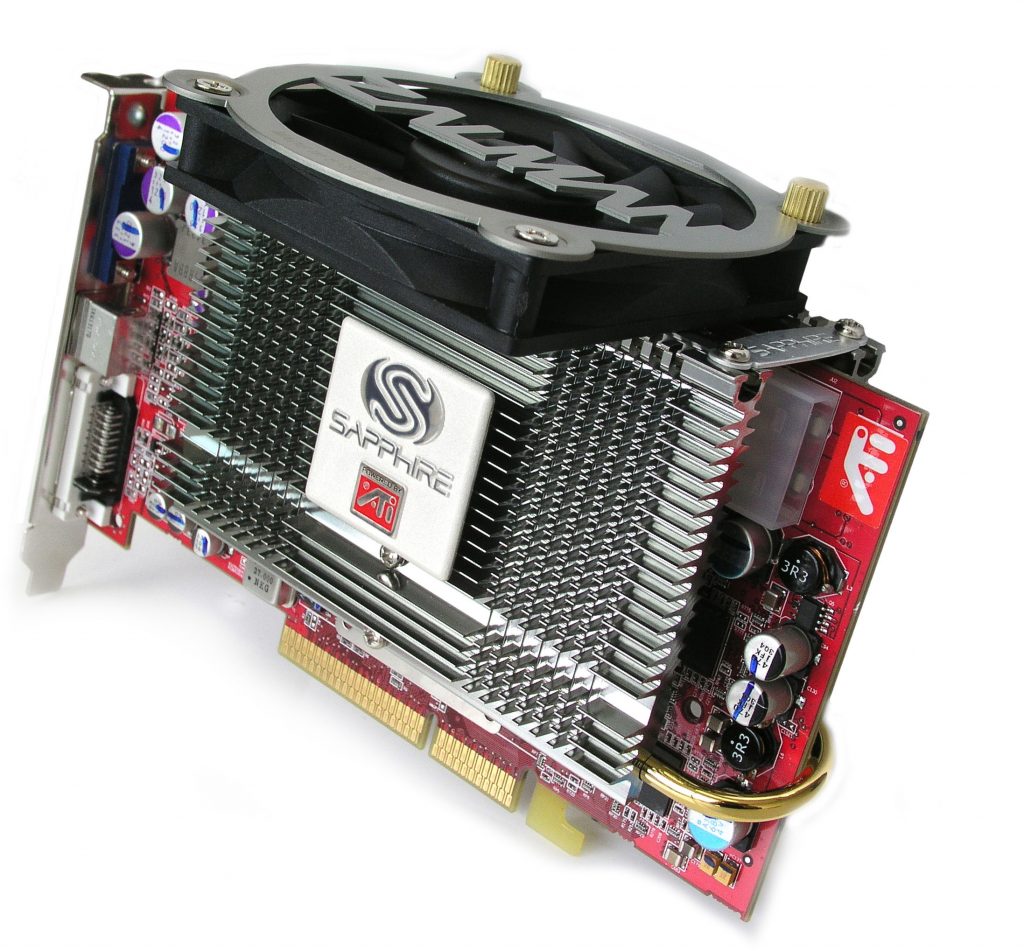 Heatpipes, a dual slot cooler and blower-style fans were a major leap forward and just a taste of even bigger innovations to come.

Please stay tuned for the next installment of this series!