If you’ve kept up with recent game releases, you might have noticed all the controversy about a certain feature that seems to have become a mainstay: Loot Boxes.

What are loot boxes?

On its own, the idea of a loot box is not actually all that bad. The player opens the box and receives a random award. If you’re lucky, it may be something amazing, though most of the time it is fairly low end or common items. It’s a risk-reward system that makes the game just a little bit more exciting for some people and can be done well in certain types of games, or at least not cause any real harm.

Harm does arise, at least potentially, when big publishers decide to monetize these features, asking for real money to purchase said boxes, something many people have compared to gambling and have even called out these companies for preying on people with addictive personalities.

While most games hide behind the fact that what you get from these boxes is cosmetic and only optional, and doesn’t impact the gameplay in any way, some gamers would argue that what your character looks like is part of the game experience as well, and being stuck with a stock looking character or weapon while someone else runs around shiny and golden or epic could harm the experience, all because players can’t or don’t want to pay for the boxes. Recently, however, games have gone even further, putting actual game-changing loot in the boxes. For example, Middle-earth: Shadow of War has unlockable orcs in their boxes. These orcs are a major part of the game’s main mechanics and even lore, and while you can certainly get orcs by playing the game, unlocking them through the loot boxes is much faster and makes going through the grind later in the game a lot more bearable. This is twice as insidious because that grind is required if you want to see the “real” ending to the game.

Why are these boxes even a thing?

But why would publishers even add these loot boxes if they’re so annoying? Well, their justifications are always the same: they’re optional if people want to skip a repetitive or time-consuming part of the game. They also help pay for the game since the development costs keep rising, while the price still remains at 60$ after all these years. However, neither of these excuses stands up to scrutiny.

If you are aware that your game has annoying moments that either have to be grinded out or paid for, then why not change or remove those parts of the game to make it a better experience for everyone? Gameplay and story are king, and whilst every title needs “fluff” to pad out its gameplay and run time, that fluff can be made interesting. Allowing people to “pay to skip” means that you were all too aware of these flaws during development and could have fixed them. The saddest part of this excuse is that sometimes, as in Shadow of War, doing most of the grinding is fun anyways, so it seems publishers are fessing up to gameplay problems that don’t really exist just to defend a stupid business practice. Now the argument about games becoming more expensive to produce while still costing 60$ is actually true to a degree, though that price is for the base game. Publishers sell all means of “gold”, “platinum”, “legendary” or whatever editions for hundreds of dollars, to say nothing of expensive “collector’s editions”, which really do have some fancy stuff but, in some rare cases, don’t even give you access to the game itself. Add to that the infamous “season pass”, which takes your money on the promise of future content and day-one DLC’s, which in many cases consist of content taken from the main game and sold back to the player for even more money, or at best offered to players who pre-purchased their game before reviews. After all of that is taken into account, it becomes clear that the cost for full games is well above the 60$ “entrance fee”. With games selling more copies than ever before, it’s hard to imagine publishers not turning a profit, especially when they add micro-transactions and loot boxes to their products with increasingly greedy moves intended to lure players into purchasing them.

Of course, hiring expensive actors for PR and marketing purposes or spending way too much on graphics may also need to be dialed back. Not every game needs Kit Harrington as a main character or a Hans Zimmer soundtrack, and there are excellent actors and music directors out there looking for a chance to show off their skills, and to do so more affordably. 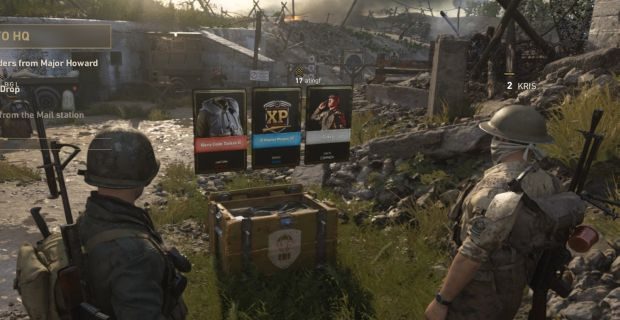 COD: WWII loot boxes can be seen by others when opened

The fight against loot boxes or micro-transactions does at times seem a lost cause. Many publishers are making it standard practice to involve them in all of their games, no matter the genre, mode or sense. However, we gamers must keep pushing back against the greed of the publishers, or soon we might start buying a 60$ loot box simulator that gives skins for the boxes themselves and the rest of the game as legendary drops.

In all seriousness, though, we cannot let things slide while repeating the empty words of the publishers as they introduce new innovative levels of greed. Just like DLC, just like expansion packs, loot boxes are a clever idea that shouldn’t be perverted by greed.

And finally, I must give huge props to Bethesda who, though no strangers to gold editions and season passes, have largely stayed out of the micro-transaction and loot box game so far. With two recent releases—The Evil Within 2 and Wolfenstein II: The New Colossus—they have shown us that they intend to remain out of that game for the foreseeable future. They may not be perfect, but we need more publishers to respect their own games and fans as Bethesda is doing.