Smooth Gaming Graphics to Level Up Your Game

SAPPHIRE Technology announces the new PULSE AMD Radeon™ RX 6600 XT Graphics Card for the ultimate 1080p gamer pursuing an unrivalled, vivid gaming experience with incredible hardware. A quality solution for AAA game scenarios, the PULSE AMD Radeon™ RX 6600 XT Graphics Card is the key piece to round out every PC system and the stylish design is sure to be a fit into any chassis.

The PULSE AMD Radeon™ RX 6600 XT Graphics Card headlines with 2048 stream processors running with a Boost Clock of up to 2593 MHz and a Game Clock of up to 2382 MHz. The latest 8GB of GDDR6 high-speed memory clocked at 16 Gbps Effective with 32 MB of AMD Infinity Cache, which dramatically reduces latency and power consumption, ensuring higher overall gaming performance than traditional architectural designs. It is equipped with 4 output ports including 1 x HDMITM and 3x Display Port 1.4 with DSC outputs to support the latest display monitors in the market. The PULSE AMD Radeon™ RX 6600 XT Graphics Card series features 32 powerful enhanced Compute Units and 32 Ray Accelerators. Behold a silent and cool gaming experience on the PULSE AMD Radeon™ RX 6600 XT Graphics Card, designed with the powerful Dual-X Cooling Technology. Powered by two massive and quiet fans, the streamlined form of the blades result in greater airflow and more heatsink coverage at a low noise level of 32dBA*. It works in tandem with the Intelligent Fan Control feature to keep the temperature of all the GPU components low, while balancing performance and fan noise. The Fuse Protection feature is engineered into the circuit of the external PCIe® power connector to preserve the components and protect the graphics card. 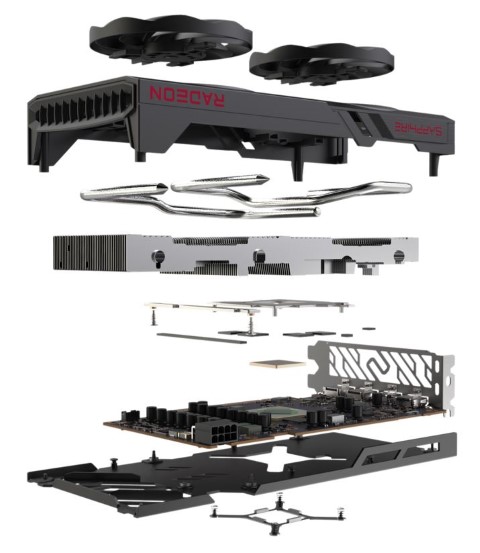 The all metal backplate coupled with the sleek and sharp shroud design deliver a simple and powerful gaming aesthetic to any chassis. The PULSE AMD Radeon™ RX 6600 XT Graphics Card is sure to be a beautiful addition to craft an outstanding battlestation.

Performance to Dominate Your Game. The NITRO+ AMD Radeon™ RX 6600 XT Graphics Card headlines with 2048 stream processors running with two clock settings, including a Boost Clock of up to 2607 MHz and a Game Clock of up to 2428 MHz. The latest 8GB of GDDR6 high-speed memory clocked at 16 Gbps Effective with 32MB of AMD Infinity Cache, which dramatically reduces latency and power consumption, delivering higher overall gaming performance than traditional architectural designs. The graphics card also provides up to 4 output ports including 1x HDMI and 3x Display Port 1.4 with DSC outputs to support the latest display monitors on the market. ARGB LED shroud design topped with the external synchronization of RGB LEDs between the graphics card and the motherboard through the 3-pin header in the tail of the SAPPHIRE NITRO+ AMD Radeon™ RX 6600 XT Graphics Card enables gamers to create the custom PC of their dreams. The new Hybrid Fan Blade design is fitted on the SAPPHIRE NITRO+ AMD Radeon™ RX 6600 XT Graphics Card, which combines the key strengths of the traditional axial fan and blower fan. The quietness of a traditional axial fan design in conjunction with the strong air pressure of a blower fan design results in up to 5.5% better improvement in the downward air pressure through the fan while keeping a low noise level compared to previous generations. To enable up to 85% longer lifespan than regular sleeve bearing fans and maintain silence, the fans feature Dual Ball Bearings. The fan favourite SAPPHIRE Quick Connect Fan feature incorporated in the design is a quick solution with just one screw holding the fans securely in place to enable simple and easy cleaning to keep dust out of the graphics card.

The original NITRO+ Free Flow feature has been redeveloped into the modern Wave Fin Design. When the wind goes into the fin module, the Wave Fin Design reduces the friction in order to reduce the wind cut noise resulting in a lower decibel gaming experience. ARGB LED shroud design along with an intricate metal backplate where you can customize the different LED colours using the SAPPHIRE TriXX Software. Choose from various different modes including Fan Speed Mode, PCB Temperature Mode or the colourful rainbow mode, or turn off the LEDs to fully tailor the graphics card to suit any build. 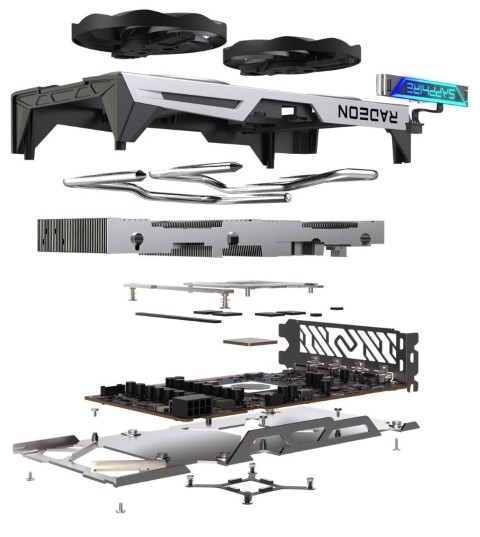 Each card is designed with a Dual BIOS where you can choose between performance mode and silent mode to enhance your gaming experience. Using the TriXX Software BIOS Switch, gamers can effortlessly switch from performance mode to silent mode and back using our TriXX software for a quick and easy shift between the dual BIOS modes. Enhance the performance of the NITRO+ and PULSE AMD Radeon™ RX 6600 XT Graphics Cards with our SAPPHIRE TriXX Software. On a variety of games, TriXX Boost increases your FPS by slightly decreasing resolution through the TriXX software that is then adjusted through Radeon™ Image Sharpening for an incredible boost. Choose from a customizable resolution scale or from additional custom resolutions based on user input for a much more fine-grained control over the quality vs. performance tradeoff. ONE GAMING DNA - AMD RDNA 2 gaming architecture, the only gaming architecture that spans from next-generation desktop PCs, laptops and consoles to mobile devices and automotive infotainment systems, is designed to deliver the optimal combination of performance and power efficiency.

1080p FOR ALL - With up to 32 enhanced compute units delivering powerhouse performance, experience 1080p gaming at ultra-settings with smooth framerates and maximum visual settings.

GET COMPETITIVE WITH HIGH REFRESH RATES - Get competitive and render all the frames needed to win. With the horsepower to drive ultra-high performance, the AMD Radeon RX 6600 Series graphics cards enable a seamless fluid, high refresh rate gaming experience.

Future-Ready Gaming with up to 8GB GDDR6

MEMORY FOR ALL TEXTURES - Crunch through game textures with up to 8GB GDDR6 memory. Get equipped to play the newest games at the highest settings

EDIT, RENDER, AND VISUALIZE WITH NO RESTRAINTS - Experience limitless content creation with hardware-accelerated ray traced rendering in applications like Radeon ProRender to bring photorealistic imaginary worlds to life. Whether it be professional video editing, graphic design, or 3D modeling, the possibilities are endless.

NEW LEVEL OF IMMERSION - Takes games to a new level of realism with support for features such as DirectX® Raytracing (DXR) and variable rate shading.

DETAIL WHERE IT MATTERS - Variable Rate Shading (VRS) technology accelerates the level of detail where it matters. By selectively choosing where to allocate GPU resources, performance and immersion can be optimized.

ULTRA-FAST RESPONSES TO YOUR EVERY MOVE - Radeon™ Anti-Lag helps reduce lag by intelligently controlling the queuing of CPU work ahead of GPU work across thousands of games running on DirectX® 9, 11 and 12 APIs.

TURBOCHARGE YOUR GAME - Radeon™ Boost now takes advantage of the variable rate shading hardware found on the AMD Radeon RX 6000 series graphics cards. It selectively reduces the shading rates in certain areas of a frame as characters are turned and rotated in gameplay, delivering extra performance and increased responsiveness, with little effect on visual quality

ARMED WITH MAXIMUM BANDWIDTH - AMD Radeon RX 6600 XT Graphics Cards feature PCI® Express 4.0 support, with a throughput of 16 GT/s and enables two times the bandwidth compared to PCI® Express 3.0. Get ready for the next generation of PC gaming and content creation.

LATEST MEDIA STANDARDS - Decode media with the latest codecs from the world’s most popular media streaming sites such as YouTube, Netflix, and Twitch.

The SAPPHIRE NITRO+ and PULSE AMD Radeon™ RX 6600 XT Graphics Cards are shipping now, and will be available from selected SAPPHIRE e-tailers and retailers worldwide.

1 Boost Clock Frequency is the maximum frequency achievable on the GPU running a bursty workload. Boost clock achievability, frequency, and sustainability will vary based on several factors, including but not limited to: thermal conditions and variation in applications and workloads. GD-151

5 Radeon Image Sharpening is compatible with DirectX 11, 12, & Vulkan APIs and DirectX 9 for RX 5000 and 6000 Series only, and Windows 10. Hardware compatibility includes GCN and newer consumer dGPUs, Ryzen 2000 and newer APUs, including hybrid and detachable graphics configurations. No mGPU support. GD-156

9 Video codec acceleration (including at least the HEVC (H.265), H.264, VP9, and AV1 codecs) is subject to and not operable without inclusion/installation of compatible media players. GD-176