Power supply – what you should know about it - Part I

Most users are aware that the power supply is a vital part of a PC and buying the cheapest model of unknown brand isn’t the best idea. Despite that, there are also various myths and misunderstandings about power supplies and how they operate. Allow me to introduce you to  important power supply issues and help you choose the unit that best suits your needs.

Where PCs are concerned, transformer-based linear power supply wouldn’t work well, thus a switching-mode power supply is required. So as not to bore you, I won’t get into any more detail than that.

Like all devices that convert power, power supply doesn’t operate at 100% efficiency. During conversion, some power is lost as thermal energy.

The certification system below will help you easily determine how efficient a power supply is. It shows the efficiency that must be achieved under certain loads to pass specific certifications. Of course, the higher the efficiency, the better.

Three things stand out in the table:

Below are certification badges that can be found on product boxes and vendor marketing materials.

The certification process isn’t free, so some producers don’t put budget units through the test. Is that bad? It depends, but I tend to think not, because vendors do sometimes deliver units with a very good price/quality ratio. Accompanied by a certificate, however, they would have to be more expensive. Antec VP400PC is a good example – it is marketed as “meeting 80+ Bronze specification” but in fact it isn’t certified. But this doesn’t make it a bad unit: it’s actually a great choice to power up a budget PC. 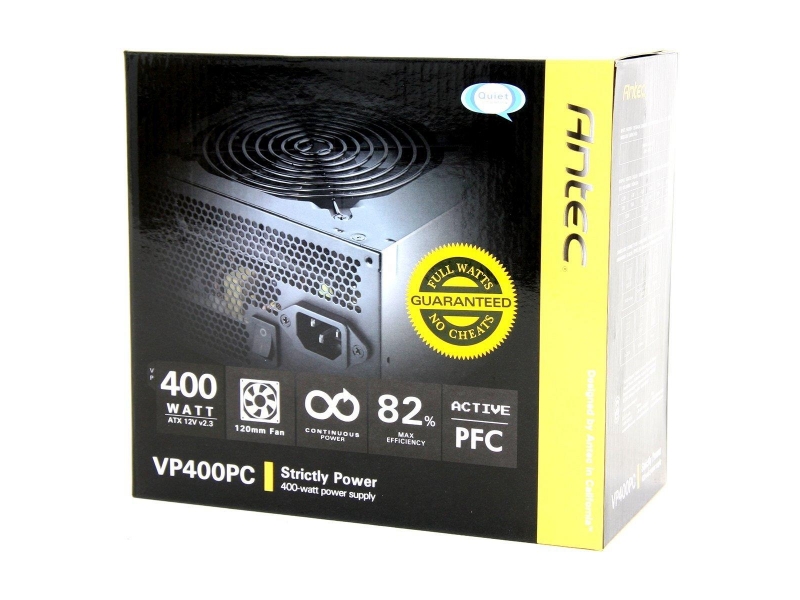 But certification is a beacon of overall quality, so if you want to power something more than a simple PC for internet browsing you should look for a certified PSU unit. But don’t fall for the highest rating. For sure the higher efficiency the better – less electric power is lost as heat. But at some point the price difference between power supplies becomes so large that savings on electricity even over an extended period won’t cover it.

Titanium PSUs are cool, both for their operating temperatures and the status they bestow upon their users. But the extra money you pay for them vs. units with identical parameters and Gold efficiency will never come back to you as savings on electricity bills. At this moment, I would recommend 80+ Bronze PSUs for basic usage (office and budget PCs) and 80+ Gold units for more demanding users. Platinum PSUs are for enthusiasts and Titanium units for those who want to have the cream of the crop. Silver rated units are also ok, if ever less popular – budget-oriented users still choose Bronze and people with higher expectations go for the Gold. 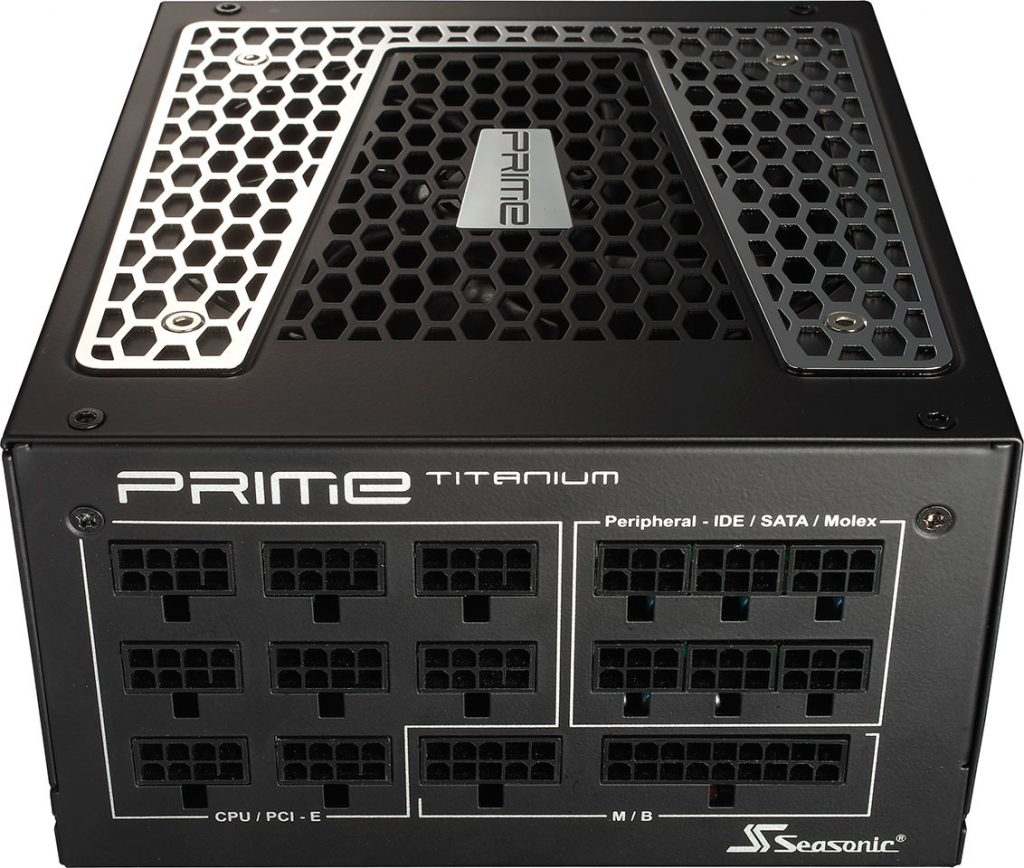 The certification system seems trustworthy, though there have been reports of vendors claiming certificates on their own. However, I would venture to say there is little chance the biggest and most esteemed brands would sink to such behavior.

Myth: Some people think that an 800 W power supply draws 800 W all the time it is on. This is patently false, and you needn’t purchase the lowest wattage PSU you can find to combat the problem. The power supply draws as much power as the PC needs at the moment plus losses attributable to PSU efficiency. Consider this: if PC components draw 200 W while wired to an 800 W PSU with 90% efficiency, the entire unit will consume 220 W in total.

Please note: Power supplies generally work with both 115 V and 230 V AC. Some older power supplies once came equipped with special switches that enabled you to move between 115V or 230 V and newer ones switch automatically. But for units marked ‘EU’, those days are over—they don’t work with 115 V AC. 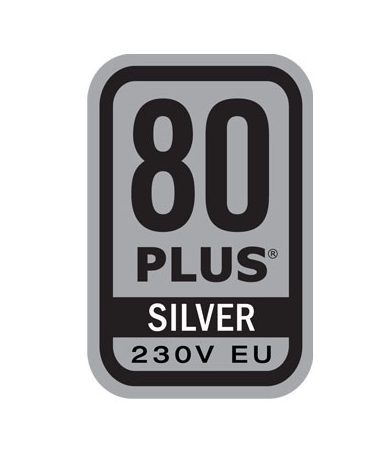 Fact 1: Tests sometimes prove that a Silver-rated PSU, for example, could pass the Gold requirements. This shows how good such units are.

Fact 2: Sometimes PSUs are exactly the same but with different 80+ ratings and wattages. Super Flower is a prime example of this. Leadex 1300 W with an 80+ Gold certificate is absolutely the same as a Platinum-rated Leadex 1000 W. The only difference is between overcurrent protection set lower at the 1000 W version to meet Platinum requirements (please read more about protections in the next chapter of this series). 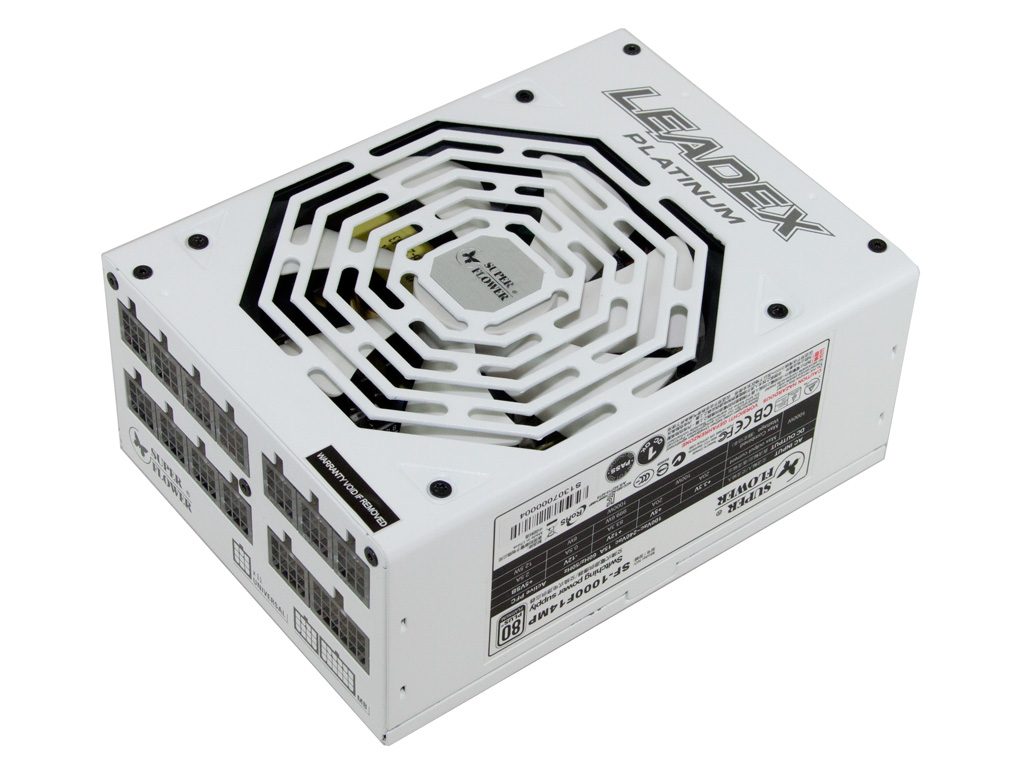 In the age of Pentium III, 3,3 V and 5 V rails were very important because they fed the processor. Today, they are not so important – power-hungry processors and graphics cards draw power from 12 V rails, so what you are looking for is a unit where the output of the 12 V rail(s) matches, or nearly matches, that of the entire unit. 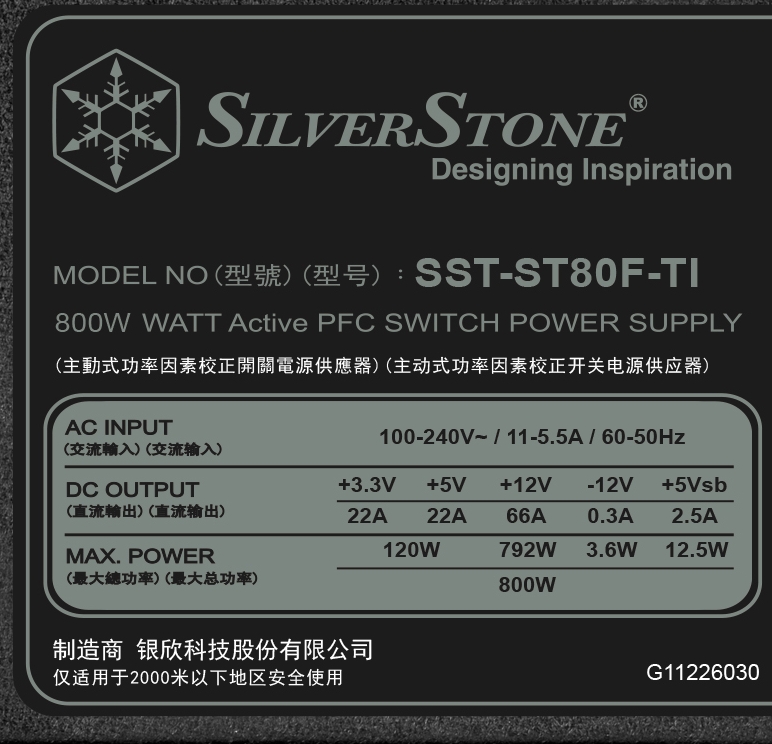 If a PSU rated for total output of 25 A on 12 V rail(s) is marked as a 500 W unit, take a moment to reflect even if, strictly speaking, no lie has been told. For sure 3,3 V and 5 V lines are very strong in such a power supply, and it could deliver 500 W, but on rails that don’t interest you. This is a very common pitfall for inexperienced users, and an easy way to distinguish an old-fashioned PSU from products meeting or setting today’s standards. 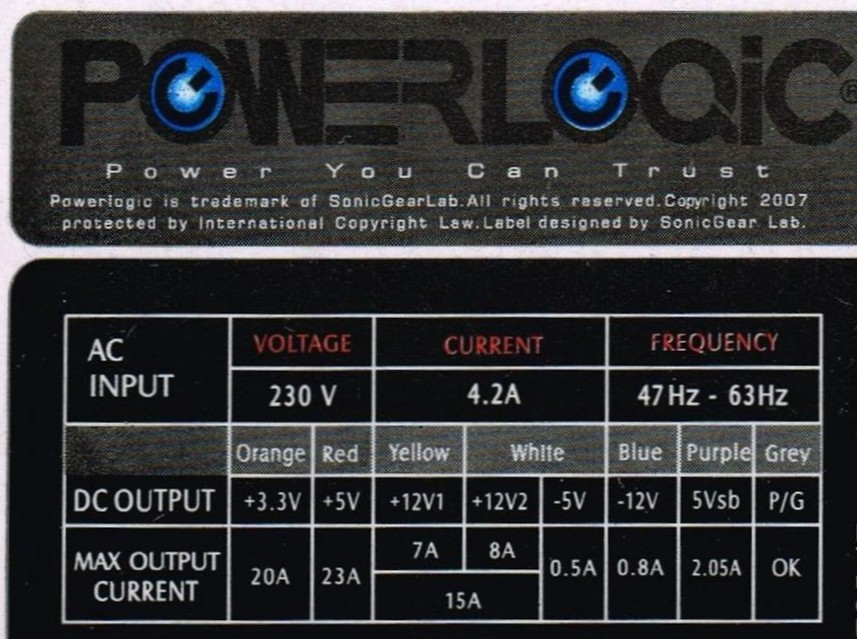 The number of 12 V rails is important, too.

There are single 12 V rail units and multi 12 V rail PSUs. This is one consequence of the outdated ATX standard that introduced weird limitations for 12 V rails. The standard is long gone, but the trend remains, so some PSUs still have more than one 12 V rail. If there are multiple rails they are usually marked as 12V1, 12V2, 12V3 and so on. PSU manuals should indicate which plug connects to which rail, and sometimes it’s even marked on the PSU itself. 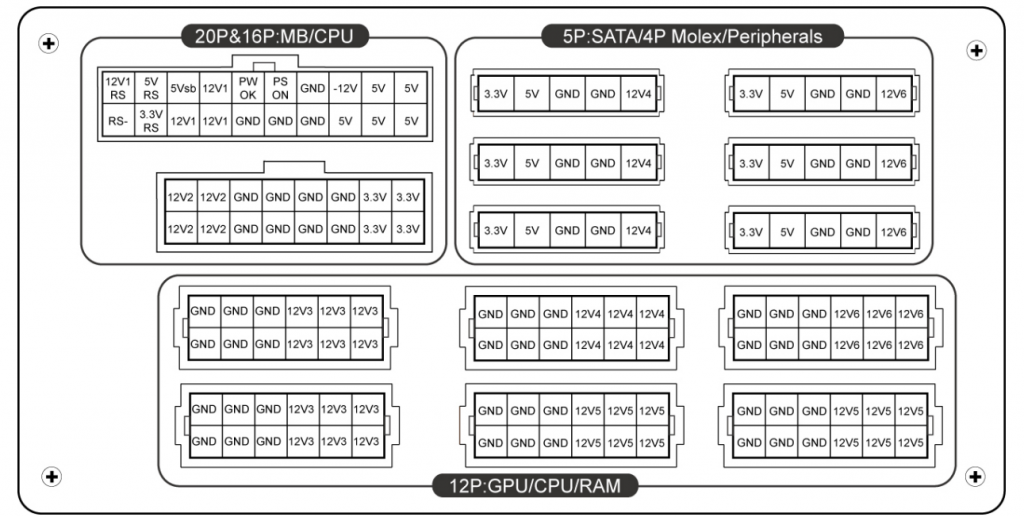 From a practical point of view, a single 12 V rail unit is better. Their multiple 12 V counterparts bring no advantage whatsoever. Imagine that you have an 800 W PSU with two 12 V rails each offering 35 A. Remember that it is completely up to the producer how cables are attached to lines, so it could happen that you plug the Core i7 5960X and the Radeon R9 390X into the 12V1 and nothing into the 12V2. With such power hungry components, the PSU would hit overcurrent protection under load and switch off. If CPU connector(s) were attached to the 12V1 and PCI Express connectors to the 12V2, the PSU and, therefore, the whole PC would run just fine.

Now imagine that you have four power-hungry cards and six relatively weak 12 V rails… Even if your PSU is, all said, strong enough to run all the components, with multiple 12 V rails you could struggle to arrange all the connections or totally fail to power the system under load. If you have enough wattage with one rail, you just plug in all the hardware and it works.

Warning: When checking PSU always look at real / continuous power. Peak power is like PMPO power in speakers and is not representative for real performance. 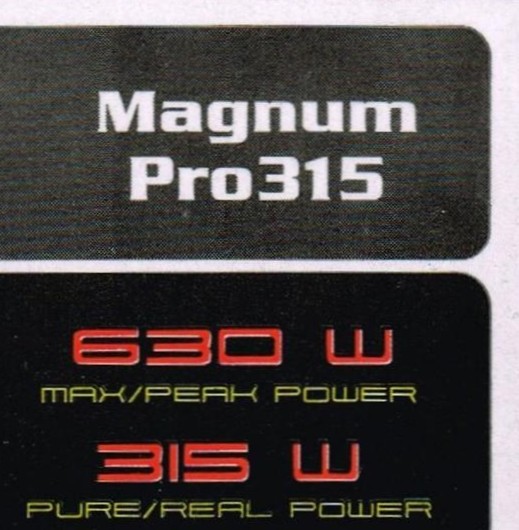 Fact 1: Some units are equipped with a jumper or switch that enables multi 12 V and single 12 V rail operation.

Fact 2: Though not common, some PSUs have knobs that allow you to adjust the voltage of each rail. Check out the SilverStone Zeus ZM1350 for a look at one such unit. 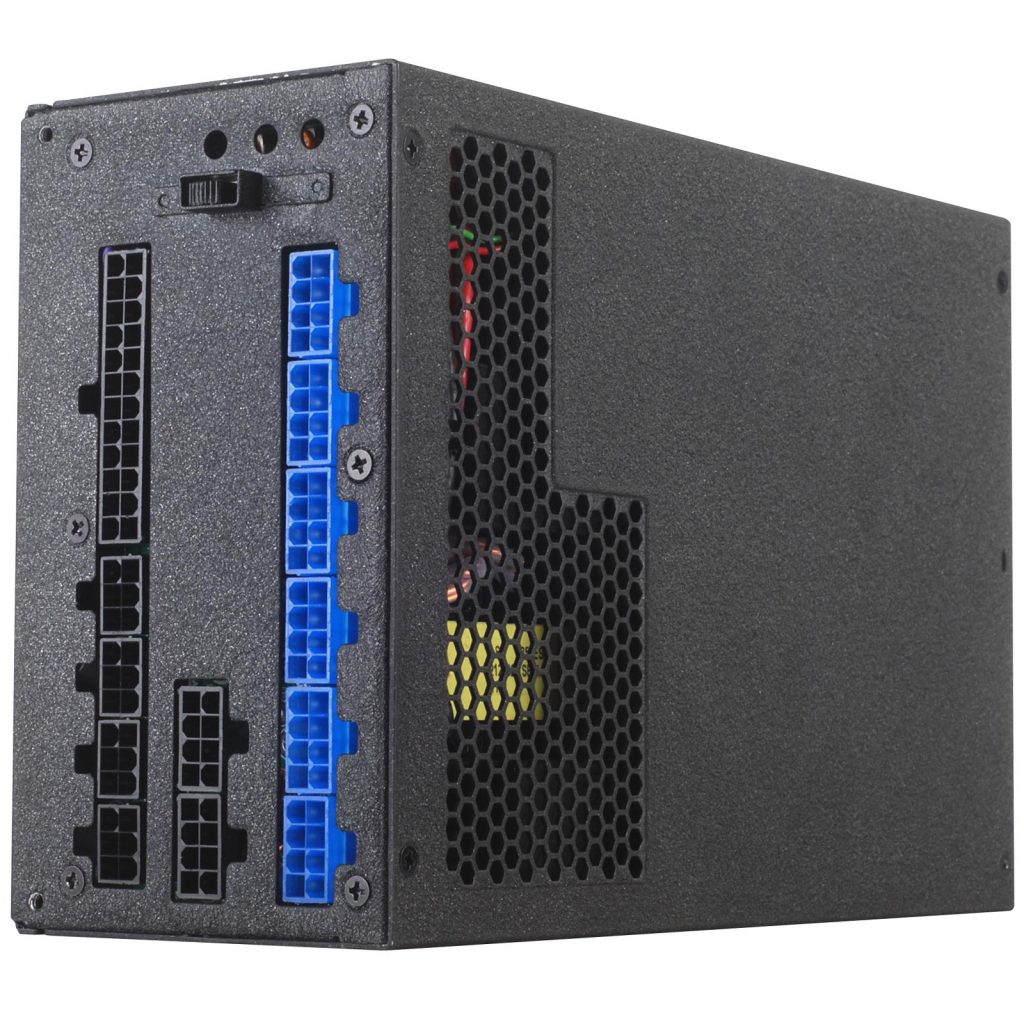 Fact 3: Older PSUs came with a -5 V rail, but modern units have dropped them. It is needed for example for OCZ Booster to show current voltage on the display. 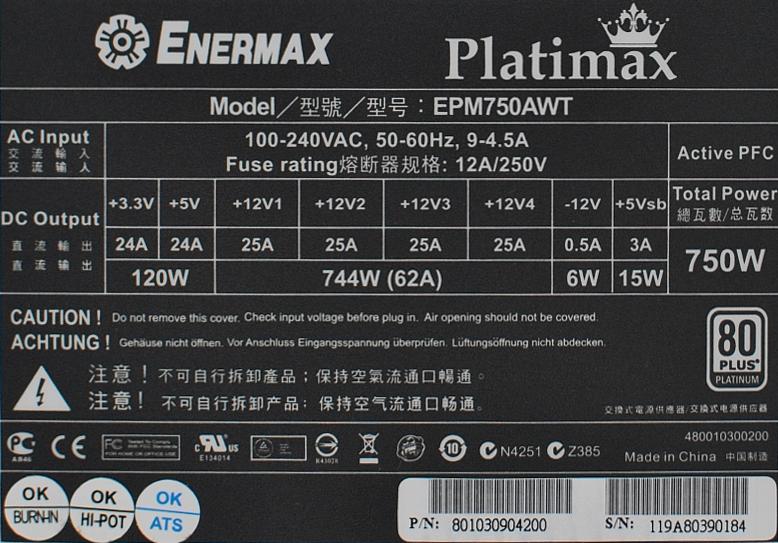 Please note: I played around and managed to successfully merge the eight 12 V rails on a SilverStone Strider 1500 W (SST-ST1500) into one massive rail by soldering them together. But please don’t mess with your PSU unless you really know what you’re doing. 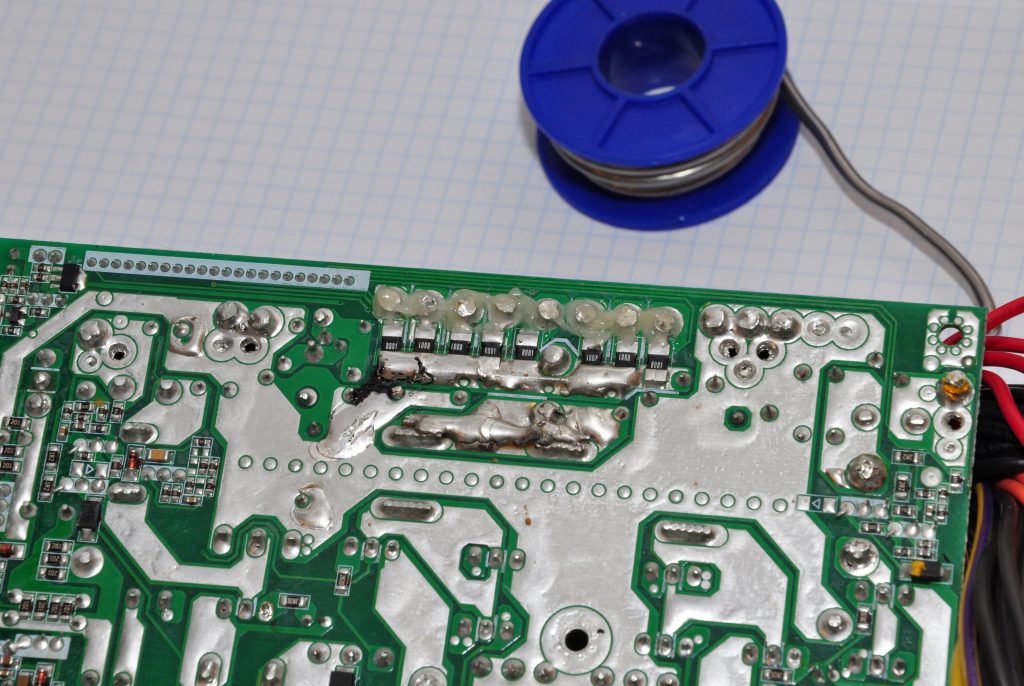 Flux applied to PSU during soldering, tin visible in the background

Go to Part II of my PSU guide