The new era of drivers and dedicated software for Radeon graphics cards begins now. We at SAPPHIRE couldn’t be more excited about today’s public debut of Radeon Software Crimson from our friends at AMD. A completely new UI, a wide range of new features and performance optimizations, improved stability and really a brand new experience for the user. This is one of the biggest, if not the biggest, updates in the history of Radeon drivers. Buckle up, SAPPHIRE users, you’re in for a treat!

If you’re not too excited yet and you think there’s nothing for you here, well… we will see about that by the end of this round-up. In the meantime, you can already start downloading this new package directly from AMD Download Center. Before we dive into more details, let’s hear from AMD themselves:

Radeon Software Crimson is gigantic and contains changes and improvements across the board for every SAPPHIRE graphics card user out there who has at least HD 5000 Series model or newer. Underlying it all is a renewed focus on stability, on top of which an entirely new user experience is built along with new features, performance and efficiency updates. 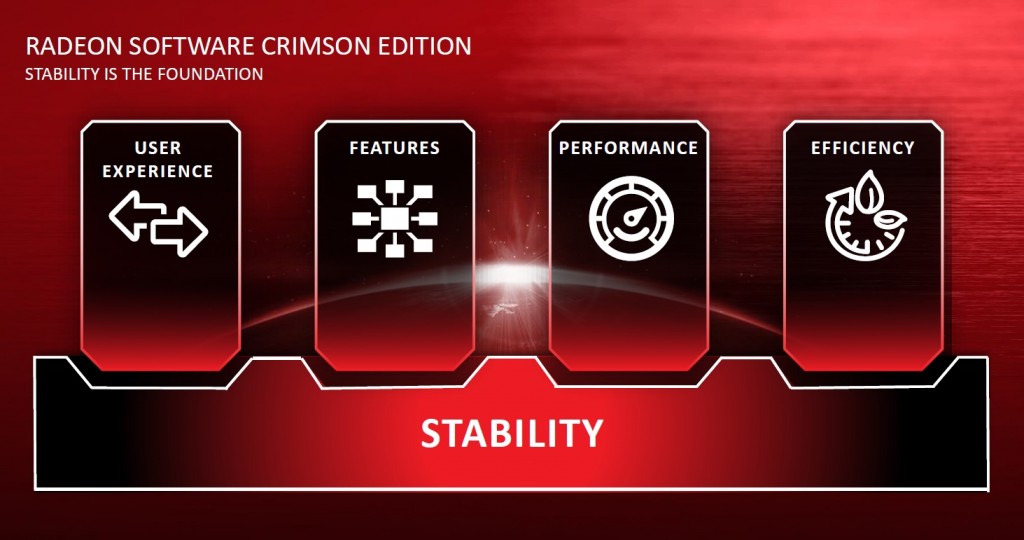 Changing almost everything within the system software may sound like a bit of a risky thing in terms of stability, but not in this case. Simultaneously to working on things like new UI or features, AMD engineers doubled down their efforts on stability improvements to make sure the new Crimson release not only feels and looks gorgeous, but also works reliably. To achieve that,  a number of enhancements in the testing procedure have been implemented. 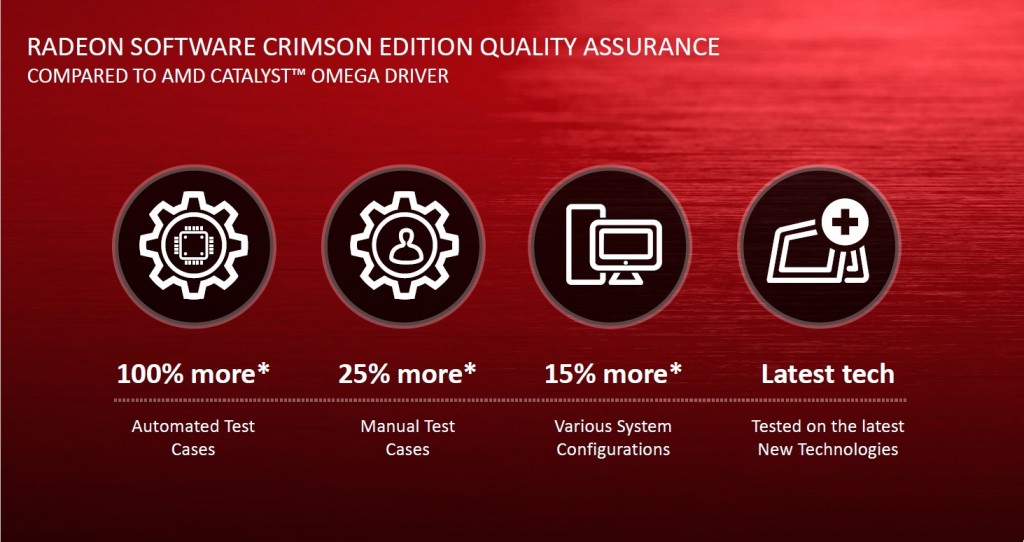 AMD has also listened to a lot of feedback directly from you – left behind on their forums or throughout the social media. This resulted in a prioritized list of fixes that are today available in Crimson. Now-resolved issues include:

Still don’t see a thing that’s been troubling you for quite some time? Go to www.amd.com/report – your feedback is crucial in resolving it!

From stuff as simple and straightforward as the time it takes the whole interface to pop up when you call it, to a very nerdy Asynchronous Shaders usage and their importance in driving VR capabilities – there’s a ton of stuff in Radeon Software Crimson that will positively influence your everyday gaming and use of your PC, basically. 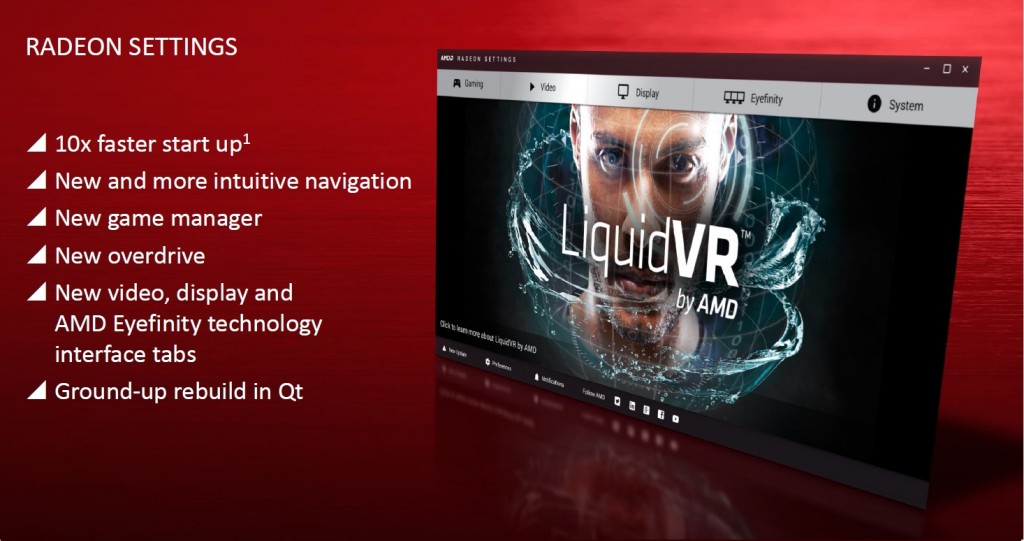 New software is rebuilt in Qt – a universal, very modular cross-platform set of libraries that are modern and allow for a smooth development process for different operating systems. That old Catalyst Control Center “tabbed” view is now gone – the interface is brand new and focused on intuitive flow, responsiveness, clean and modern look as well as discoverability. What that means in practice is that it should be faster to reach options you’re looking for, and they will be presented to you in a nice, shiny fashion.

We know what you’re here for. Redesigned UI is all cool  and shiny, but you might want to ask: is there anything really new? The answer is: there’s a LOT. 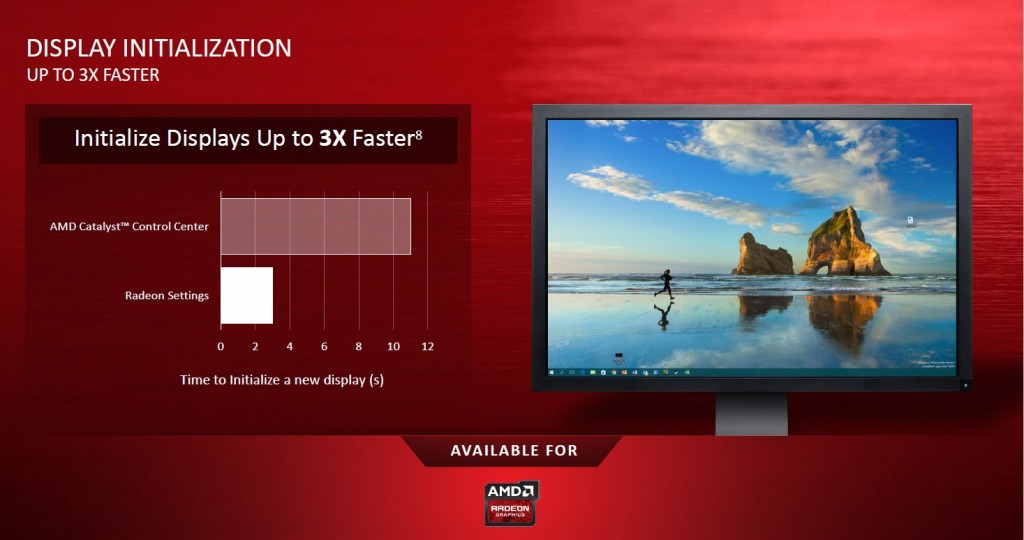 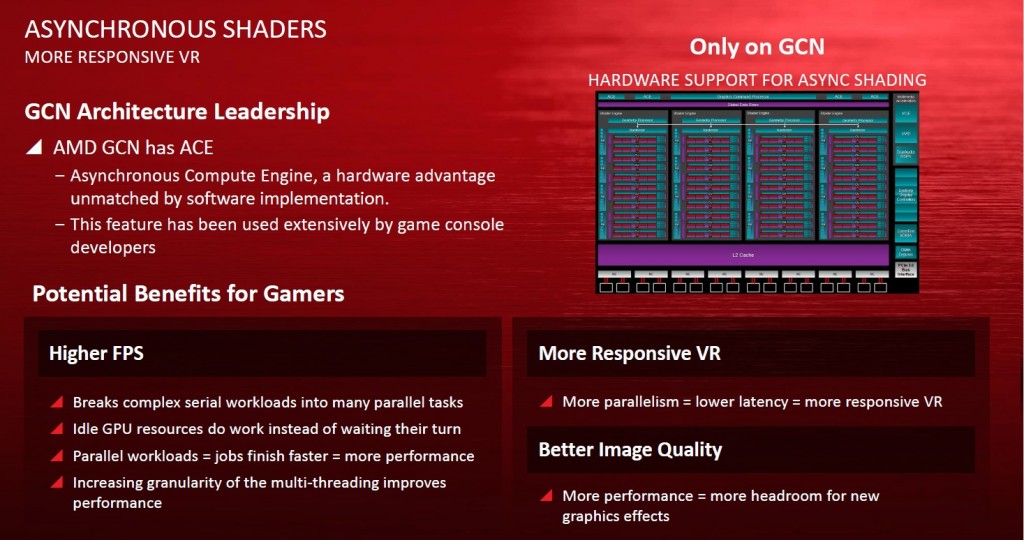 AMD FreeSync technology is gaining a significant improvement with Crimson. It’s called Low Framerate Compensation. It smooths out the framerate when it falls below the minimum refresh rate of your FreeSync-enabled monitor, improving your experience by a whole lot in those low-framerate situations with blasts and explosions and gunfire and blinking gizmos all over the place. In addition, FreeSync is now enabled in CrossFire mode for DirectX 9 games. AMD is also working hard with display manufacturers to bring FreeSync to HDMI connections. 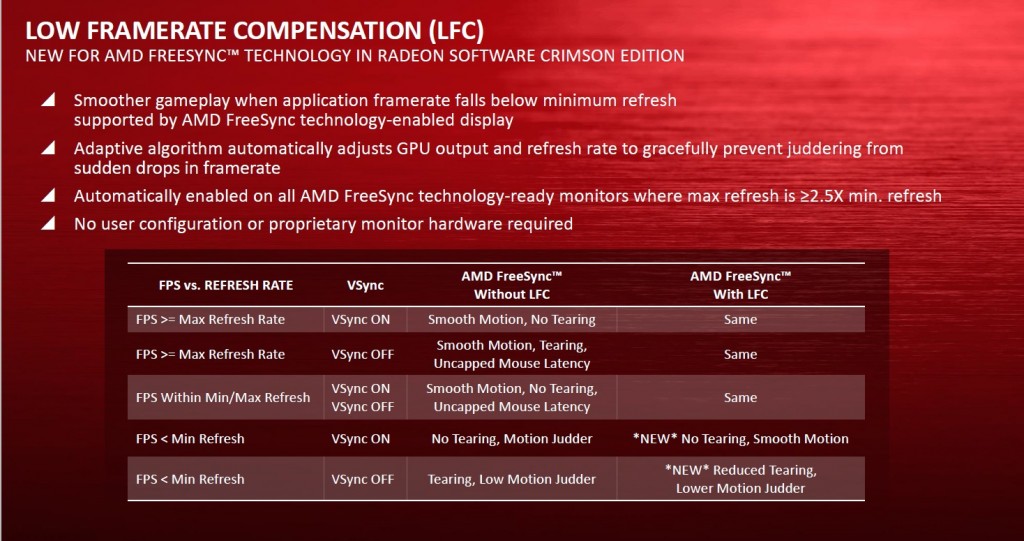 For those of you with 2 or more Radeon cards, AMD has extended frame pacing to support DirectX 9 games as well. It’s never been smoother, CrossFire users! 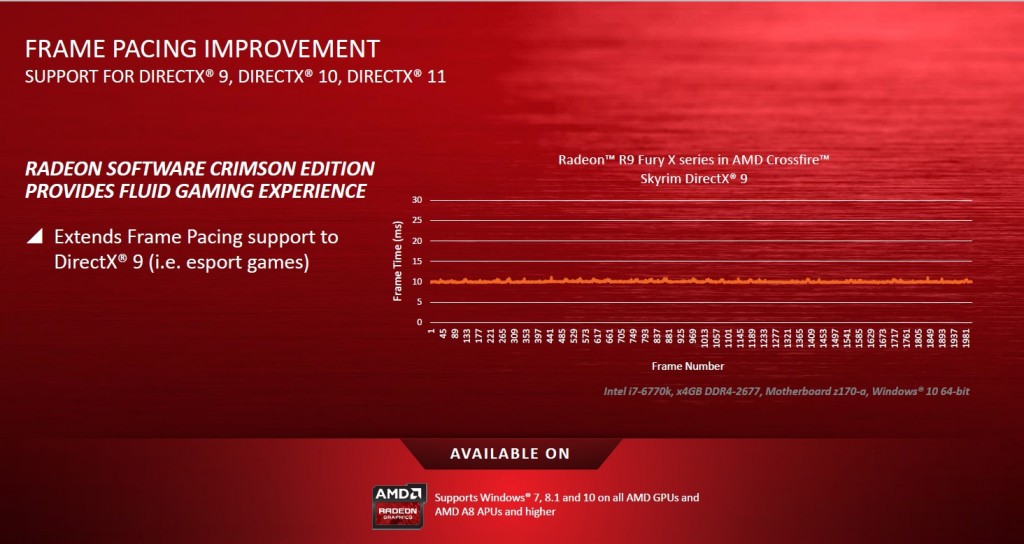 There’s more. Custom resolutions and a bunch of display tweaking options are now exposed to you in the advanced settings  – with timings, refresh rate and pixel clock available for you to play with (if you know what you’re doing). As part of that, Virtual Super Resolution comes into play, able to effectively enlarge your work space area when you use 150+ DPI monitor with Windows 10. 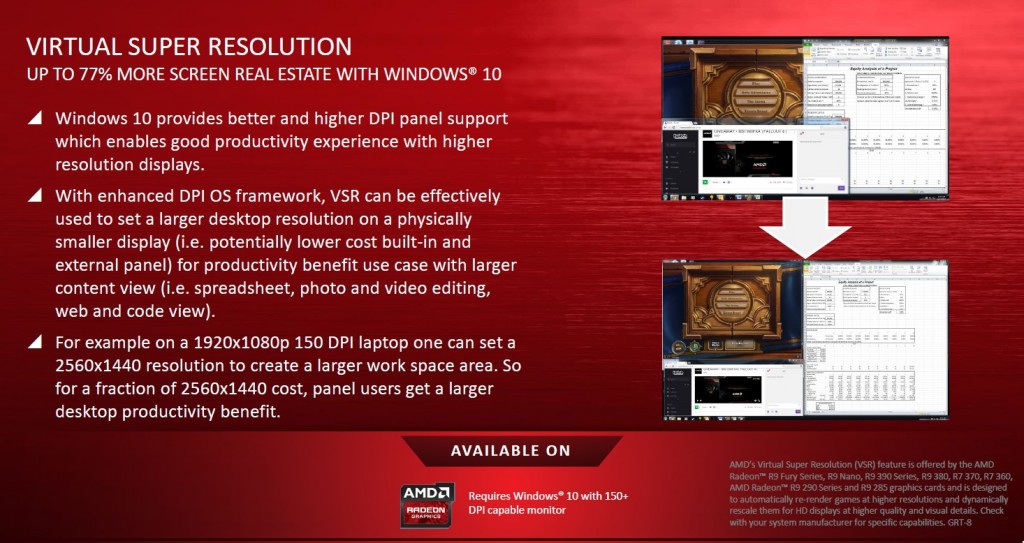 Any movie fans around? There are updates for you as well – with better image processing, scaling and quality improvements. 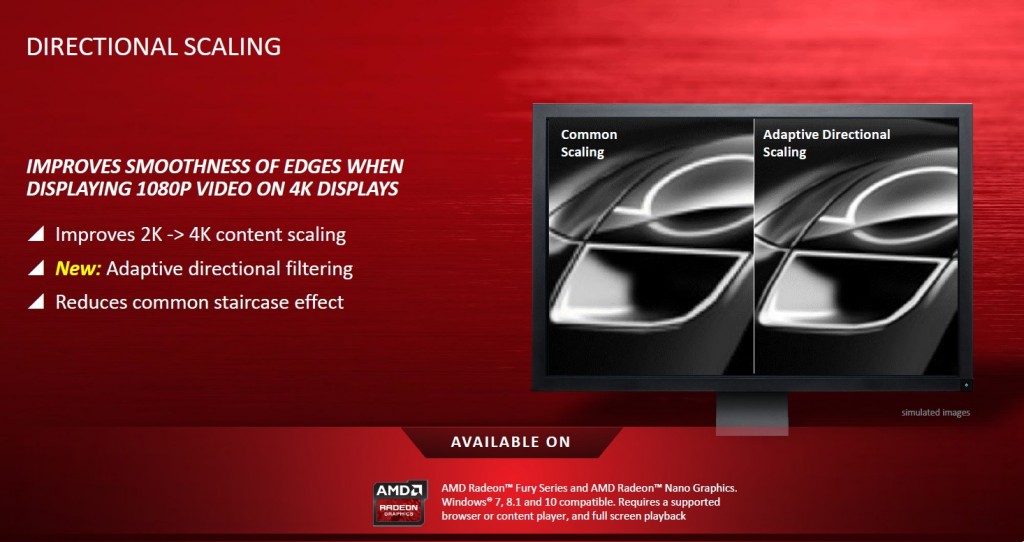 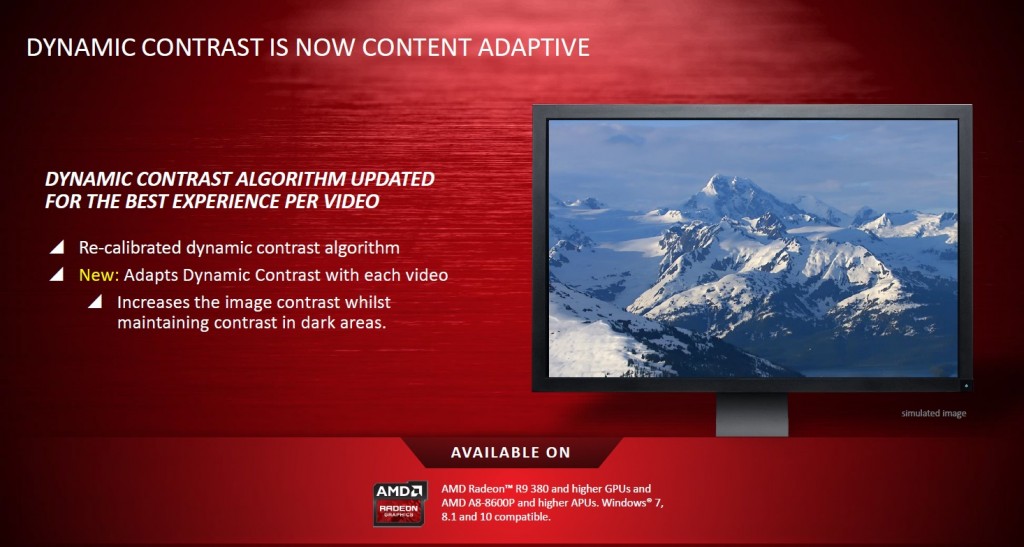 Performance – what matters most

One could argue that the ultimate thing defining a good graphics card is its performance. It’s what matters at the end of a day, how smooth your game eventually runs. AMD knows performance is a core value for gamers and with each new driver build it’s always one of the areas of focus. Crimson could be no different. 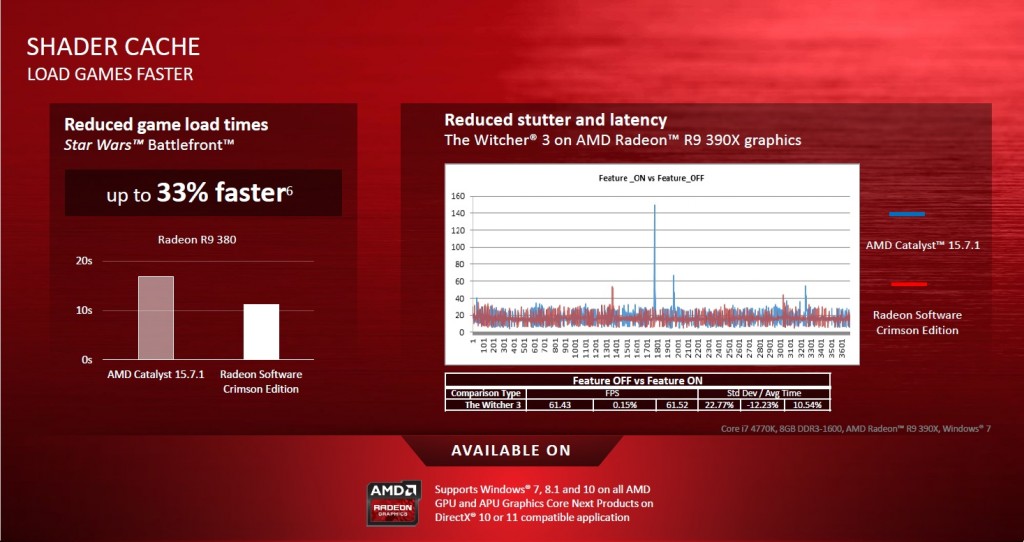 First up – the Shader Cache. Shaders are complicated sub-programs that are compiled usually when they’re used for the first time after the game launches. Shader Cache will now keep them stored, compiled for your Radeon card, effectively reducing the load time of games and often even that annoying stutter that occurs from time to time when you do something rare and special in game, that has an unusual visual effect.

Beyond that, there are across-the-board improvements – with greater focus on DirectX 12 games (you know which card to get next when you think future-proof, right?) and recent hot titles. Even Linux users get some love! 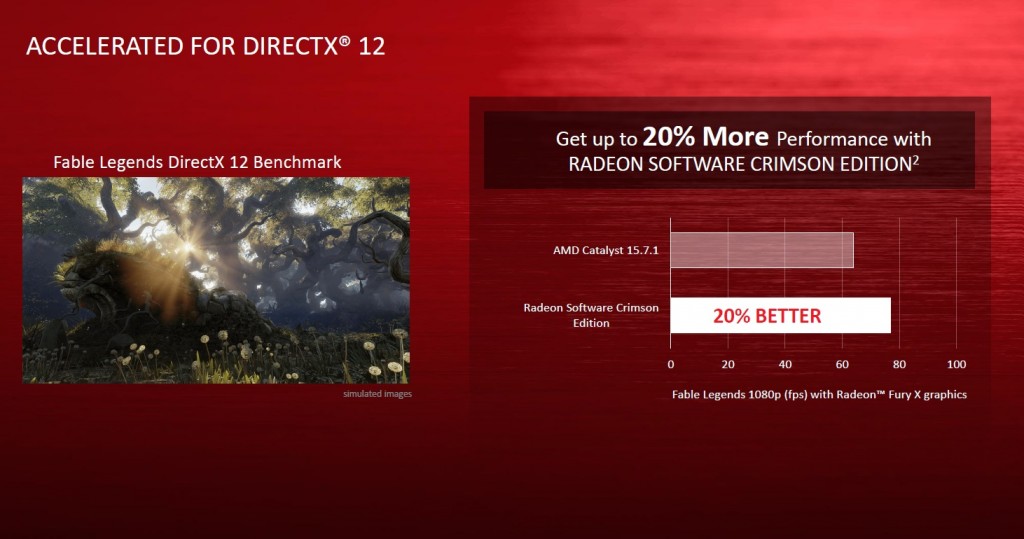 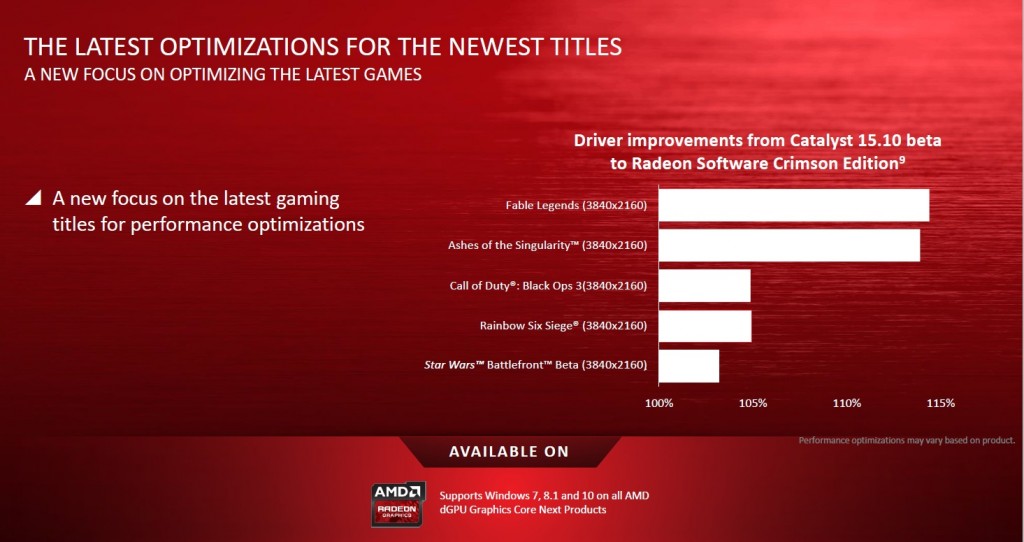 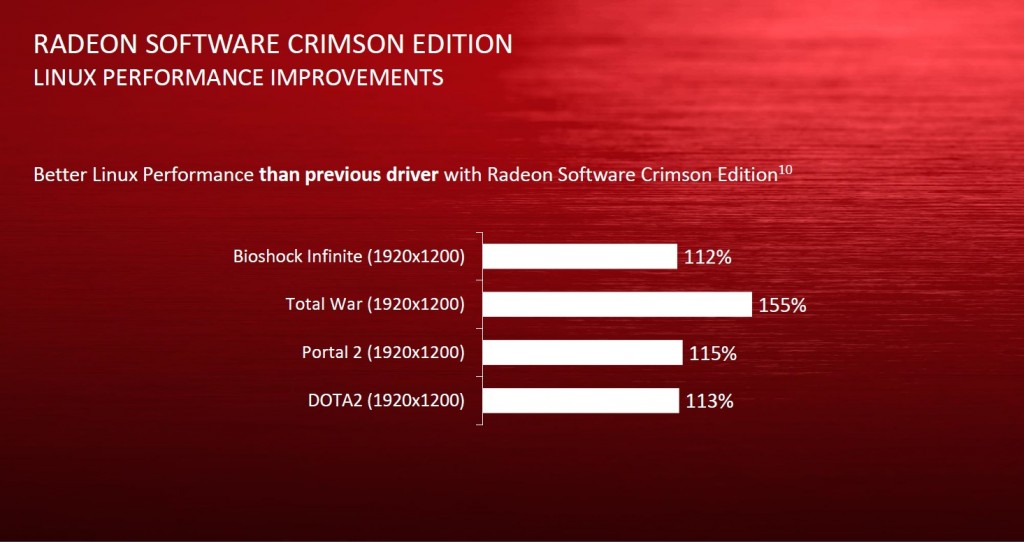 One other specific addition that’s worth calling out is the optimized flip queue size. Thanks to behind-the-scenes work at the driver level, your Radeon card will now display the latest possible position of your mouse as well as latest keyboard statuses. With latency dropping from, for example, 51 ms to as little as 17 ms (so from 3 frames to just one 1 with 60fps gameplay – can’t get any better than this), your controls will feel more accurate and responsive than ever before. This is crucial for all you eSports passionates and aspiring (or current) pro gamers. Every millisecond matters. 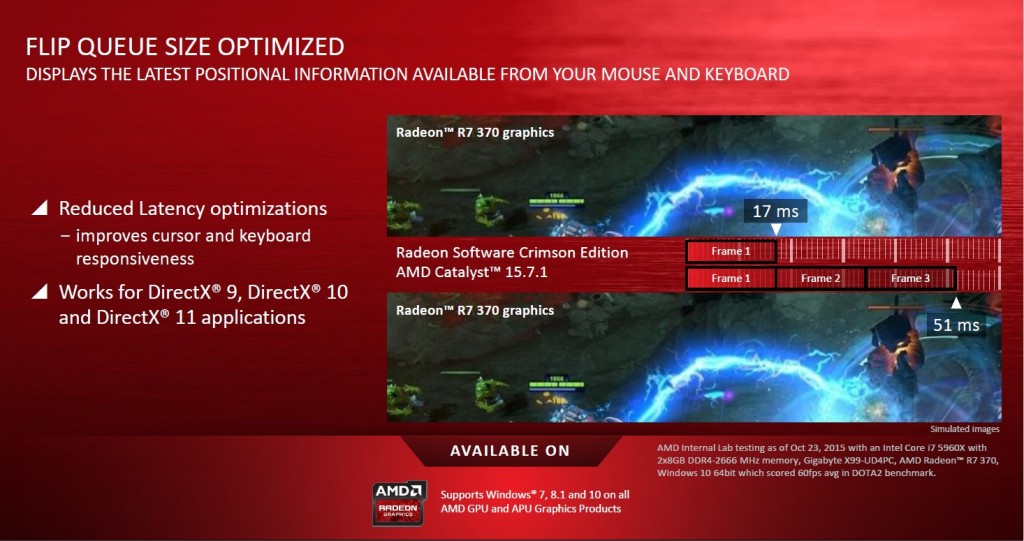 Last but not least, and important as well – power optimizations. With updated Frame Rate Target Control, you can now adjust the maximum framerate of games running with DirectX 9, DirectX 10 and DirectX 11. The range is also extended and now allows to set in anywhere between 30 – 2000 FPS. Why would you want to set a maximum framerate, you might ask? Good question, Timmy! There are lots of games that are not as fast-paced as others, yet they suck as much power as they can get to be rendered at the highest possible framerate. By putting this driver-level cap, you’re saving power – a whole lot of it, actually – and lowering the heat, putting less pressure on the cooler – that means quieter work. 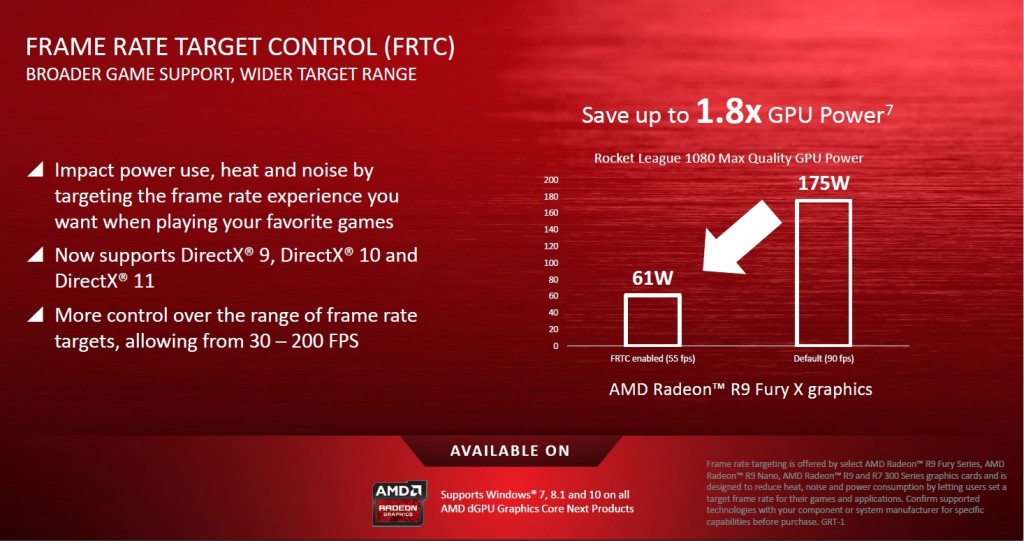 FRTC is not the only area of power savings improved with Crimson. Watching videos will now also be less taxing, with up to 21% reduced power draw in that scenario. 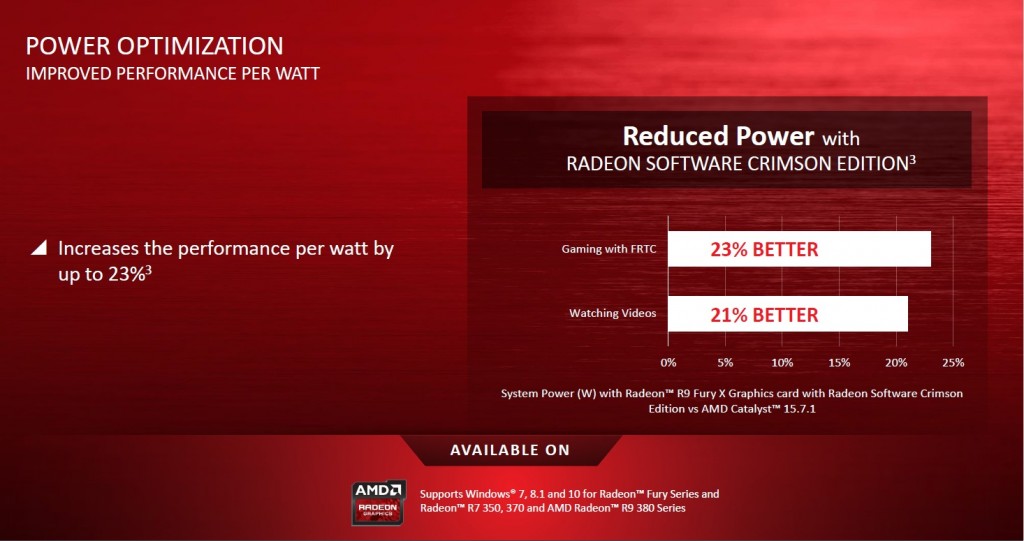 What are you waiting for?

We believe that Crimson dawns an exciting new era of software dedicated to Radeon-based graphics cards. We are excited, and you should be as well! 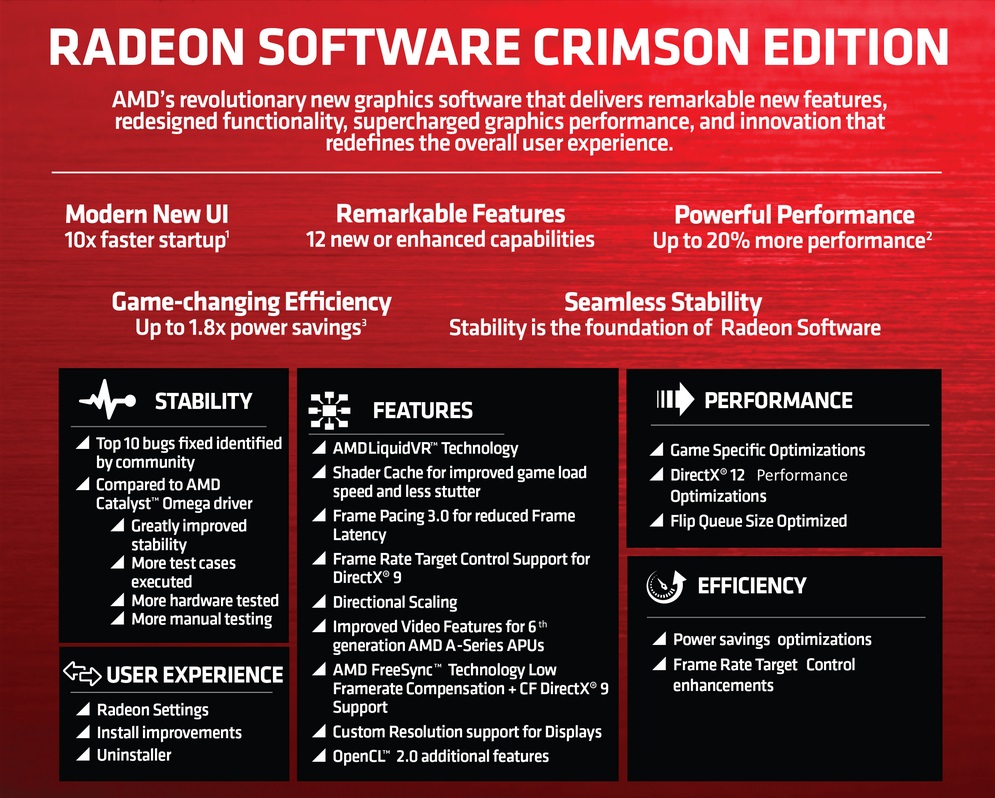 Already running Crimson? Good! Tell us what you think!