SAPPHIRE brings FURY to the NATION

The Best just got better! SAPPHIRE FURY takes Tri-X to the next level. Read on to learn more about our best graphics card we have ever made.

Most enthusiasts looking for the “best in class” graphics products know that cards with the SAPPHIRE Tri-X coolers deliver great performance, whilst also running cool and quiet. Now SAPPHIRE has taken a new evolution of its Tri-X cooler and paired it with the exciting new Fiji GPU from AMD to build the SAPPHIRE Tri-X Radeon R9 FURY (SAPPHIRE FURY).

The Fiji GPU combines the latest version of AMD’s Graphics Core Next (GCN) architecture with the revolutionary new high bandwidth memory (HBM). HBM enables super-fast data exchange between the GPU and the frame buffer, ensuring that the graphics data is updated as quickly as possible, making for smooth gameplay even at high resolutions or with complex scenes.

AMD’s Fiji Pro Chip used in the SAPPHIRE FURY has 4GB of superfast HBM with a 4096-bit memory interface delivering 512GB/s bandwidth. These wide data paths and high speeds are achieved because the GPU and Memory are assembled together in one “module”. Memory components are effectively built in stacks, so the interconnections between blocks of memory are made of silicon and are very short and fast. These memory arrays are coupled with an expanded configuration of AMD’s GCN architecture which in the SAPPHIRE FURY has 3584 Stream Processors and a core speed of 1000MHz (raised to 1040MHz on the SAPPHIRE FURY OC model).

Because all of these components are built into one module, the area of printed circuit board (PCB) taken up by the GPU, the memory and its interfaces is much smaller than a conventional graphics card design. However, this presents new problems of how to keep these components running cool and at their most efficient. In AMD’s reference FURY-X design, a closed loop water cooler was used, but not everyone favours this type of solution, and although the FURY-X PCB is quite small, considerable extra space is taken up in a system build by the radiator and fan assembly, and the need to route the water pipes.

SAPPHIRE’s solution was to build a new and sophisticated cooler developed specially for this technology, based on our award winning multi-heatpipe triple fan Tri-X cooler. Our engineers say that the SAPPHIRE FURY has the most efficient Tri-X Cooler ever built by the company. The multiple heatpipe array now consists of seven heatpipes – two 8mm plus four 6mm heatpipes in addition to the central industry leading 10mm heatpipe. Heat is transferred from the GPU and core components with a solid copper transfer plate, and the heatpipes are surrounded by high density stacked cooler fins.

“The SAPPHIRE FURY has the most efficient Tri-X Cooler ever built by the company.”

Great but quiet airflow is provided by three 90mm fans each with aerofoil section blades and dual-ball bearing hubs for long reliable life. A diecast mounting frame supports the PCB and cooler assembly and provides rigidity. The cooler shroud mounts to this frame and controls airflow, and because the cooler assembly extends beyond the PCB there is increased air circulation through the end section of the cooler. Finally a thick aluminium backplate reduces the temperature of the PCB mounted components.

Running temperatures of the card are controlled by two sophisticated systems. The FURY GPU has multiple thermal sensors and AMD’s Advanced Fan Control system regulates fan speeds by arbitrating the signals from these multiple sources to achieve the lowest fan speeds for a given target operating temperature. The default target temperature results in very low fan speeds and quiet operation even under load. In addition, the second generation of SAPPHIRE Intelligent Fan Control (IFC II) implemented on this card interacts with this so that all fans are completely stopped at light load – meaning the card is totally silent until the operating temperature rises under increased load.

The SAPPHIRE FURY is the first Tri-X card to be given a SAPPHIRE Performance Index of 5, meaning it is rated at Ultra Enthusiast Level and is suitable for 4K Gaming and demanding multi-monitor applications. To support multiple monitors, the card is fitted with three DisplayPort and one HDMI (1.4a) outputs. This enables it to support four monitors natively, or up to six monitors if you use an MST hub or Daisy-chain capable monitors. 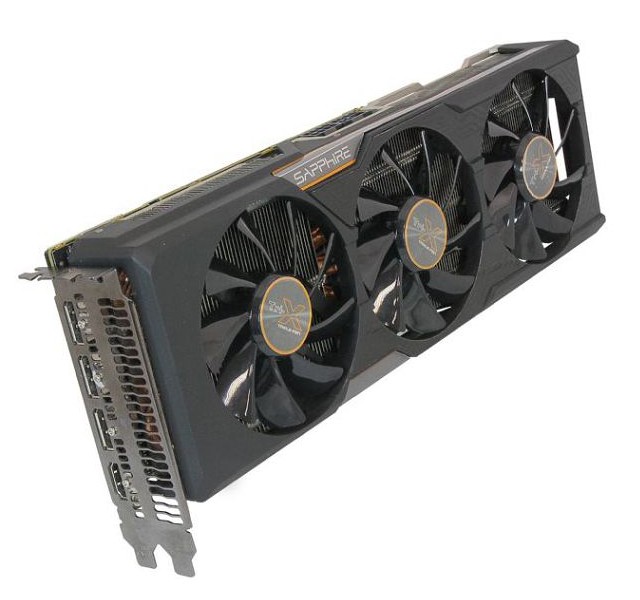 If you like to do a bit of performance tuning, the SAPPHIRE FURY is now supported by the latest version of our TRIXX software, which allows overclocking and a range of settings to be saved for different applications. TRIXX is free to download from our website. The SAPPHIRE FURY is also fitted with a Dual BIOS Switch. In one position the power envelope is limited to 300W, which is the standard setting. In the other position, this limit is unlocked to 350W allowing more headroom for overclocking. For the hardcore performance enthusiast, the SAPPHIRE FURY supports AMD CrossFire to enable two or more of the cards to be used in a CrossFire enabled mainboard.

The SAPPHIRE FURY is DX12 Ready giving support for the latest operating systems and supports all the latest AMD features including AMD FreeSync, VSR and Liquid VR. It also has an onboard DSP that delivers AMD TrueAudio for the most realistic audio effects. So we believe the SAPPHIRE FURY really is the best graphics card we have ever built!

Bill Donelly
Bill Donnelly is Global PR Director for SAPPHIRE Technology. He is a hardware enthusiast and has been building, overclocking and tinkering with PC systems for longer than he cares to remember, but admits that he is rubbish at gaming, having never spent the time to get any good at it.