The Promise That Was Broken: F2P

Free-to-Play gaming has gone from a small niche to a standardized model for game developers but during the evolution what we had placed our hopes on has turned into our worst nightmares.

In its original form F2P was pure, it was meant to offer gamers the game play experience without placing a cash investment into the game. If you enjoyed the game and wanted a deeper experience or wanted to some of the cosmetic add-ons you would buy these from a cash store in the game. This allowed you to support the developers and pay as much into the game’s ecosystem as you wanted.

By providing a steady supply of new content via the game store developers would create a steady cash flow from the game and be able to fund further expansion. In turn the game experience would continue to evolve and if the game captured your attention you would spend money for more play.

The promise of F2P gaming was that developers would do a few “fluffy” item updates with real content additions come at longer, regular intervals. The “fluffy” content would provide the steady stream of cash flow needed to fund the real content down the road.

“The promise of F2P gaming was that developers would do a few “fluffy” item updates with real content additions come at longer, regular intervals.”

However accounting departments soon realized that the “fluff” material was super cheap and easy to produce. For example adding a new mount into the game could be as easy as changing an existing mount’s color – literally seconds of real work for the art department – and that in turn could be sold with a massive market when compared to actual resources used resulting in easy profits.

Soon the game stores became flooded with the latest colored horse, new cloak or hat. Materials that were zero effort to produce but drove money into the coffers. This would have not been a terrible thing except they quickly realized that actual in game items, items with the ability to affect the gameplay, could also be easily made and make quick cash. At first this was potions and then experience boosts, but eventually it became, for some games, real game changing items thus leading to the term “Pay to Win”.

Even with all of this, however, there was still hope, but that hope has never bore fruit, the hope that all this income would be funnelled back into deep, meaningful content additions. 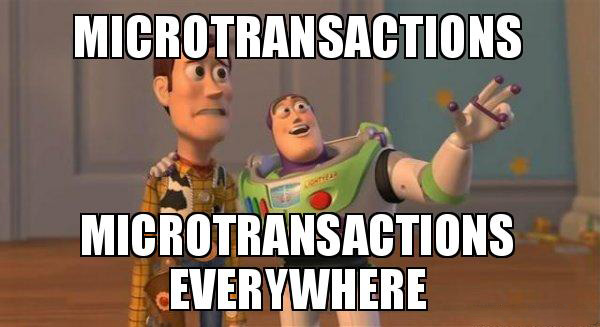 Today the micro transaction model has invaded ALL forms of PC gaming. Be it the one-shot solo game, the MMO, FPS, RTS, F2P, P2P or subscription model, all have some kind of micro transaction system. Despite this abundance of easy income through simple item creations we have not seen an increase in meaningful expansions or content. The pace for expansions has not increased and the depth of expansions that do come out has actually diminished.

F2P held so much promise for PC Gamers: it offered us a new world where we decided the worth of a game. As a politician, however, F2P showed us the shiny new face we wanted to see and once in power, crashed reality down on our heads.